Where Are The 2022 Winter Olympics Being Held?

The 2022 Winter Olympic and Paralympic Games will be hosted by Beijing, China. At the 2015 128th IOC Session in Malaysia, Beijing was chosen to host the Games following their bid – in doing so, they will be the first Chinese city ever to host the Winter Olympics, and the fourth in East Asia. Additionally, Beijing is the first city to host both the Winter and Summer competitions, following the 2008 Beijing Olympic and Paralympic Games.

The venues will be spread out across Zhangjiakou, Yanqing and Beijing City, due to the various terrains. From the Beijing National Stadium, where the opening and closing ceremonies will be held, to the Xiaohaituo Alpine Skiing Field, the Games will span across multiple venues tailored to different sports. Throughout the Olympic and Paralympic Winter Games, 109 events will run over 15 disciplines, in seven sports.

Fans of the Winter Olympics can watch the event live from the 4th February 2022 to the 20th February 2022, while the Paralympic Winter Games will run from the 4th March to the 13th of March 2022. Over the course of 26 fast-paced days of competing, each country will fight to reach the coveted number one spot on the medal scoreboard. With Team GB rising through the ranks, the 2022 Games may be the most successful yet.

Can a Winter Olympic & Paralympic Games Be Sustainable?

According to Beijing’s prestigious International Certification ISO 20121 award, yes. Inspired by the 2012 London Olympic Games, the certification recognises when competitions have paid close attention to their effect on our climate. The Beijing Organising Committee has ensured that measures are in place to control the social, economic and environmental impact, through sustainable methods.

The 2022 Beijing Winter Olympic and Paralympic Games is the first competition in China to have been awarded the accolade.

What Happened At The 2018 South Korea Winter Olympic & Paralympic Games?

Hosted in PyeongChang, South Korea, the 2018 Winter Olympics was one of the most successful competitions for Team GB. Topping the leaderboard was Norway with a grand total of 39, closely followed by Germany (31) and Canada (29). The host nation, South Korea, achieved their highest medal haul with 17 podium appearances, five of them gold medals.

From the 9th of February to the 25th of February 2018, Team GB came 19th on the leaderboard; with four bronze medals and one gold medal. 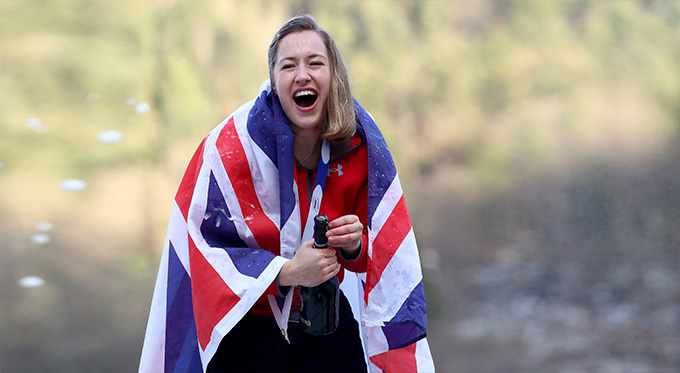 Lizzy Yarnold achieved the only gold medal for her country in the Skeleton race, making her the first British sportsperson to defend a Winter title. Despite retiring in the same year following injuries, she is considered to be Team GB’s most successful Winter Olympic athlete.

Who May Be Returning For Team GB?

After their 2018 performance at the Winter Olympics, Team GB are eager to continue their successful streak at a Games where they have previously struggled to reach the podium. But who do we predict will be competing at the Games?

Katie Ormerod is one of Great Britain’s most successful snowboarders. Though she was forced to drop out due to injury, she was chosen to represent her country at the 2018 South Korea Winter Games following a bronze medal at the 2017 Aspen Winter X Games. Described as “Britain’s best medal chance”, Katie has gone on to win a silver medal at the 2019 New Zealand World Cup and was named the first female to land a double cork. Katie could be Team GB’s best chance of a snowboarding medal.

Skeleton racer, Laura Deas, won a bronze medal at the 2018 Pyeongchang Winter Olympics. Since she first started competing in 2009, Laura has led the way for Britain’s Skeleton success. The fast-paced, gritty sport requires nerves of steel and an unwavering hunger for gold, traits which may see Laura defend her title at the 2022 Winter Olympics. Laura even boasts a gold medal from the 2015 Altenberg BMW IBSD World Cup.

Isabel Atkin is a freestyle skier who represented Team GB at the 2018 Pyeongchang Winter Olympic Games. At the event, she earned a bronze medal for her ferocious performances – the first skiing medal that Great Britain has ever won. Isabel started skiing at a young age at Sugarloaf Mountain in Mane. From there, she achieved her first podium position at the 2017 Sierra Nevada World Championships with a bronze medal. Recent success includes a bronze at the 2019 Utah World Championships, suggesting her 2022 potential.

Here at Champions, we have an extensive range of Winter Olympic and Paralympic speakers perfect for corporate events, functions or conferences. If you are interested in booking one of our Winter speakers for your next event, fill out one of our contact forms or contact a booking agent directly on 0207 1010 553.