Lizzy Yarnold MBE is a British sportswoman best known for clinching the gold medal in the skeleton at the 2014 Winter Olympic Games. The Olympic speaker began her sporting experience as a heptathlete, the inspiration coming from Denise Lewis at the 2000 Sydney Olympic Games, but in 2008 she took part in UK Sport’s Girls4Gold talent scheme and was identified as suitable for the skeleton.

Lizzy Yarnold
Lizzy Yarnold MBE is a British sportswoman best known for clinching the gold medal in the skeleton at the 2014 Winter Olympic Games. The Olympic speaker began her sporting experience as a heptathlete, the inspiration com 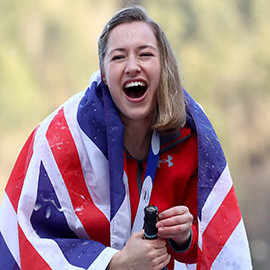 As a testament to both her talents and the Girls4Gold scouting system, she went on to cement her place in sporting history after winning every major title in her sport of skeleton in the space of 407 days. As a speaker, Lizzy often discusses her incredible achievement. She reflects on the drive and determination required to succeed in a career.

Lizzy won the Olympic Skeleton event at the Sochi Winter Olympic Games on 14th February 2014, having led the field in all four races of the event, her winning margin of 0.97 seconds was the largest ever. A rise like no other, Lizzy never expected to be an Olympic champion, let alone become one of Britain’s greatest ever female Skeleton participants.

Lizzy is also the first British athlete and second person ever to win the Grand Slam of titles including the overall World Cup title that she won in 2013-14, leading to her being awarded an MBE for services to sport in June 2014. Lizzy has had one of the fastest rises to the top in sporting history which makes her an expert in dealing with pressure. Having unexpectedly spent a large part of her career in the media, Lizzy is considered an expert in how to deal with being under the spotlight.

Comfortable delivering a motivational speech, taking part in a Q&A session or working and interacting with groups or individuals, Lizzy is adept at tailoring her message to suit different audiences. Using her experiences from the world of elite sport and having studied ‘Mental Toughness’ at University, Lizzy can deliver sessions that will resonate your business and inspire your employees.

"Lizzy was really interested in meeting the graduates in person and hearing about their journeys to JLR. She patiently stood through at least 283 selfies! Many thanks once again"

"The response from the team was absolutely fantastic, the large crowd genuinely warmed to her. The comments after the event replayed, again and again, her key messages around holding on to your vision, resilience in the face of adversity, self-belief and controlling the controllable. Landing these messages in such a natural way is only possible through true authenticity, which I believe Lizzy has in buckets. I would recommend Lizzy without reserve and look forward to working with her again in the future"