Great Britain’s most successful swimmer for over 100 years, Rebecca Adlington OBE is best known for winning two gold medals at the 2008 Bejing Olympics, including beating the longstanding 800m world record. Since retiring from professional sport in 2013 she has become a popular television personality and swimming pundit.

Her love for swimming came at a young age when she joined a swimming club in her hometown of Mansfield. Rebecca’s first involvement in the competitive tournament came in 2008 at the World Championships in Manchester. Here she won gold in the 800m and silver in the 4x200m relay. 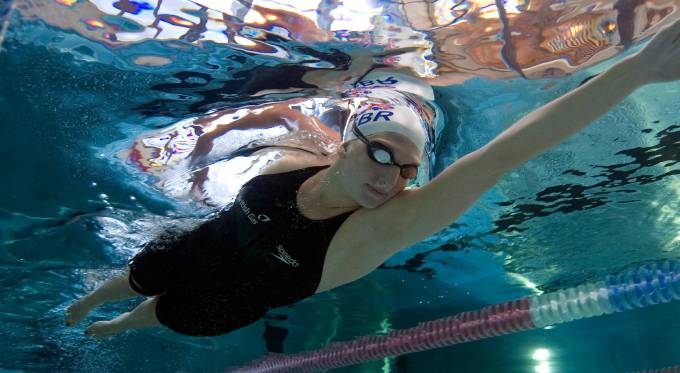 This gave her a taste of success and it was at the 2008 Olympics in Bejing where she really flourished. Competing in the 400m and 800m freestyle events, she became a British hero taking gold in both events and that prestigious world record. At the same time, she held the British, European, Commonwealth and Olympic records. Seeing her lifelong dream come to fruition was an incredible experience for her and in her capacity as an Olympic Speaker, she is able to discuss this monumental achievement in detail.

As her career progressed she continued to win medals taking two golds and two bronzes at the Commonwealth Games in Delhi. Then in 2012, the Olympic Games came to London. Despite failing to defend the two golds she had won four years previously she still added two more bronze medals to her collection and the opportunity to represent Great Britain in her home country left her with memories to last a lifetime. During her Olympic speaking occasions, she can talk about what it was like to compete in front of her home crowd.

After retiring in 2013, Rebecca has appeared on a variety of popular television shows including I’m a Celebrity… Get Me Out of Here! and The Jump. She also appeared on the BBC’s coverage of the Olympics as a swimming pundit giving her expert opinions on the latest developments in the sport something she also does at her speaking engagements.

If you would like to book Rebecca Adlington for your event or conference then get in touch with Champions Olympic Speakers. Simply call us on 0207 1010 553 or complete our online form for more information.