Medal-winning track runner Christian Malcolm hails from Wales and specialises in the 200-metre sprint. The first time this Olympic speaker hit the big time was aged 19, when he won both the 100m and 200m races at the 1998 Annecy World Junior Championships. In the same year, he won a 200m silver medal at the Commonwealth Games. As a speaker, Christian reflects upon his athletic career, discussing with his audience the highs and lows of competing.

Christian Malcolm
Medal-winning track runner Christian Malcolm hails from Wales and specialises in the 200-metre sprint. The first time this Olympic speaker hit the big time was aged 19, when he won both the 100m and 200m races at the 199 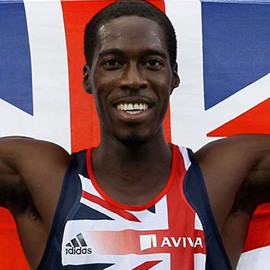 The highly popular Olympic speaker has taken part in three Olympic Games, managing 5th place on both occasions, He was also captain of Great Britain and Northern Ireland at the 2011 Daegu World Championships. At one stage, he even had trials at Nottingham Forest and Queen’s Park Rangers football clubs, but in an interview, he described athletics as a “friendlier sport and you’re not as likely to get kicked around the pitch”.

What makes Christian stand out from other successful athletes is his ability to hold an audience, and present eloquently at venues of all sizes. As well as impressing fans and experts alike on the track, the Olympic speaker has appeared on BBC Wales Radio and BBC TV. He has commented on sports events and interviewed Olympians, as well as rugby players, weightlifters and footballers.

Christian has an infectious passion for sport, using his story to inspire others. Candid, charismatic and confident, Chris expertly commands the stage, keeping his audience hooked on every word.