World champion, record-breaker, Olympic medal-winning British archer Alison Williamson has become a highly popular Olympic speaker since retiring from the sport in 2014. Featuring at industry events, business conferences and charity fundraisers, she enthrals audiences with her story of elite sport. 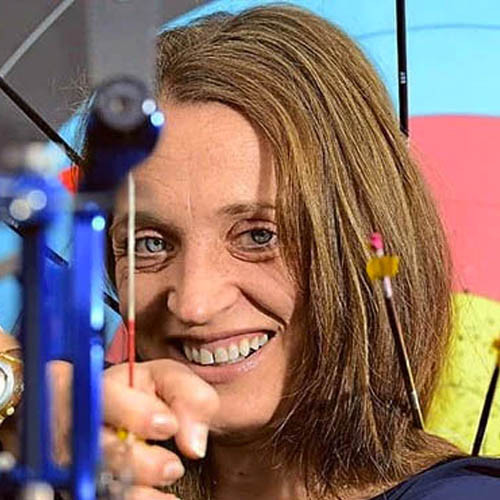 Alison is highly regarded for her enthusiasm and eloquence, as she confidently navigates such topics as peak performance, mental resilience and maximising success.

Alison is the fourth Briton to appear at six consecutive Games, as she has taken part in four Olympic Games. At the 2004 Athens Olympic Games, Alison achieved her career highlight when she won a bronze medal, the first time in nearly 100 years that a British female athlete had won an individual archery medal at the Olympics. As part of a team at the Delhi Commonwealth Games in 2010, Alison achieved a silver medal. Two years later, she was awarded an MBE for her services to sport. Alison is a popular addition to a wide range of events, thanks to her knowledge, experience and likeable personality.

A former Olympic and European record holder, Alison scored 651 from 72 arrows and, in Europe, 165 from 18 arrows. She made her Olympic debut in 1992 at just 20 years old, making her an expert in handling extreme pressure. She has gone on to become ranked second in the European Championships, ranked second in the world, and to forge a whole new career as a fascinating Olympic speaker. Alison performed at the top of her league, making her strategies to overcoming physical and mental challenges invaluable.

Other major achievements in the life of Alison Williamson include winning a World Championship silver medal and a European Grand Prix gold medal. This Olympic speaker knows what it’s like to compete at the very highest level and to stand alone under pressure as well as working as part of a winning team. As a retired athlete, Alison is an expert in resilience, perseverance and determination, all themes which will add value to an event. From famous entertainment for sporting events to business conferences, Alison’s bubbly personality and knowledge of leadership make her a hit with guests.