Accomplished international athlete and Olympic speaker, Crista Cullen MBE is a gold and bronze Olympic medallist at field hockey who has competed at a number of Olympic Games, winning a massive 197 international caps during her career.

Crista Cullen
Accomplished international athlete and Olympic speaker, Crista Cullen MBE is a gold and bronze Olympic medallist at field hockey who has competed at a number of Olympic Games, winning a massive 197 international caps dur 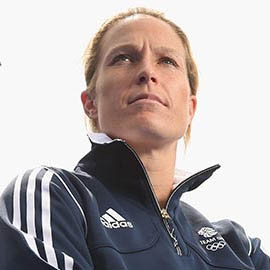 Accomplished international athlete and Olympic speaker, Crista Cullen MBE is a gold and bronze Olympic medallist at field hockey who has competed at a number of Olympic Games, winning a massive 197 international caps during her career.

Having grown up in Kenya, Cullen moved to the UK and soon became a passionate fan of hockey. Developing her confidence and skill over a number of years, Cullen soon gained her first senior cap for the GB women’s field hockey team. She first competed at the London 2012 Olympics winning a bronze medal. Her major achievement was at the Rio 2016 Olympics where she and her team won the Olympic gold.

Cullen was named in the International Hockey Federation World Star XI after the 2006 Hockey World Cup, the 2006 GB Hockey Athlete of the Year, and the 2005 and 2006 Hockey Writers’ UK Hockey Player of the Year. In recognition of her contribution to sport and hockey, Cullen was appointed an MBE in the 2012 New Year Honours.

After retiring from competitive sport, as well as turning her hand to media broadcasting and motivational speaking, Cullen formed her own consultancy. At speaking events, Cullen is a known conservationist supporting her Kenyan roots. Providing motivational advice to corporates, youth groups and charitable organisations, Cullen is now a popular choice as an Olympic speaker. Frequently focused on education, Cullen helps advise and motivate children and young adults to get into sports and exceed their goals. Cullen also gets involved in motivational speaking, charity work and coaching in the UK and abroad.

An accomplished athlete and individual, Cullen is an ideal speaker for events linked to sports, education and conservation. Cullen draws on her experience as a sportswoman to give encouragement and inspiration to her audiences. Based on the transferable skills she has developed over the years, she offers advice on business, life skills, environmental issues and overcoming adversity, and more. With a wonderful ability to adjust her talks to suit her audience and the type of event, Cullen’s speeches are always engaging and leave audiences inspired and motivated to achieve more.

“Crista gave an inspiring, passionate and motivating presentation to three hundred of our staff on the themes of leadership, the culture of winning teams and team dynamics. Crista is a charismatic, engaging speaker whose talk was inspiring and useful in equal measure. She connected perfectly with our corporate audience, building rapport with both our senior Exec’s and more junior staff. Feedback after the event was particularly strong and I wouldn’t hesitate in recommending her.”

“Crista shared her incredible story during which she also brought theory to it, linking the practical and theory together. Her passion and belief came across through the whole time she was on stage. Not only was she incredibly engaging, took great time to understand our team and business, but also understood completely what the key message was.”

“Crista has a natural warm style of presentation and the content of her delivery is ‘from the heart’. The feedback all said how amazing and inspiring her presentation had been and how encouraging it was to realise that positive thinking and a strong work ethic could bring about great results even when setbacks are encountered along the way.”

"Crista was AMAZING so so good."