Long-distance runner and Olympic speaker Jo tasted success from a very early age, achieving a 1500m British record when she was just 15 years old. She is probably best known, however, for taking part in no fewer than four Olympic Games and for coming just outside the medals behind athletes who were later embroiled in the doping scandal. Having enjoyed a hugely successful career, Jo now uses her experiences in athletics alongside powerful anecdotes to help inspire and motivate audiences across the world.

Jo Pavey
Long-distance runner and Olympic speaker Jo tasted success from a very early age, achieving a 1500m British record when she was just 15 years old. She is probably best known, however, for taking part in no fewer than fou 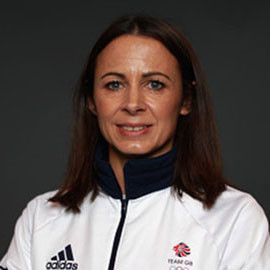 Despite suffering injuries for the best part of a decade and being plagued with viruses, Jo has won medal after medal after medal, achieving a domestic total of nine golds and one silver between 1988 and 2012. These have been gained in the 1500m, the 3000m, the 5000m and the 10,000m.

Dealing with setbacks during her career, Pavey often talks about how to deal with setbacks, whether it be missing a major sporting event or missing a crucial deadline.

Although never registering an Olympic medal, Pavey’s impact and influence in long-distance running events in Britain has been influential. The numbers of competing athletes in these events have risen sharply due to the legacy Pavey has built.

However, this Olympic speaker has won a gold medal in the 2014 European Championships as well as a silver medal two years prior in the same competition. Pavey took home a silver medal in the 2006 Commonwealth Games. When at events, Pavey is known to discuss vital topics such as peak performance and maximising success.

"Jo was absolutely brilliant at this year’s Sussex Sports Awards. She was very professional in the build-up, and made a real effort to learn about our event and the guests that she would be speaking to. Jo comes across as a very real and normal person, who has achieved remarkable feats in her life, and our guests found that hugely inspirational. I’ve had so many comments from guests about how friendly Jo was, and she stayed afterwards chatting away to some of them. Thank you so much to Champions UK for recommending and arranging Jo; she fitted the bill perfectly!"