Olympic gold medal winner, Joanna Rowsell is one of the greats of the Great Britain Cycling Team, having also won gold medals in the women’s team pursuit at the World Championships of 2008, 2009, 2012 and 2014 and a gold medal in the individual pursuit in 2014.

Joanna Rowsell
Olympic gold medal winner, Joanna Rowsell is one of the greats of the Great Britain Cycling Team, having also won gold medals in the women’s team pursuit at the World Championships of 2008, 2009, 2012 and 2014 and a gold 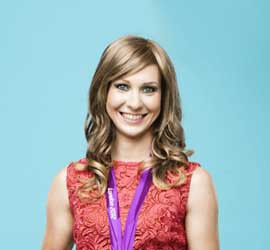 Her partnership with Laura Trott and Dani King in the team pursuit has become legendary. A truly incredible career has now allowed her to pursue a speaking career in which she uses her experiences in topics like peak performance and achieving goals to help inspire her audiences.

Joanna is an Olympic and European champion in the team pursuit and Commonwealth Games champion in the individual pursuit. At the European Track Championships in the team pursuit, she won gold medals in 2011, 2013, 2014 and 2015. No stranger to success, Joanna often discusses the importance of dealing with pressure from both a sports and business perspective, whether it be winning an event or meeting a crucial deadline.

In the World Championships of 2010 and 2015, this highly popular and fascinating Olympic speaker won silver medals in the team pursuit. And when representing England at the Commonwealth Games in Glasgow in 2014, Joanna won yet another gold medal, this time in the individual pursuit. Six years earlier, she had won a bronze and a gold in the Under-23 European Track Championships. In addition to this, she also won a gold medal at the 2016 Rio Olympic Games in the team pursuit event.

As an athlete who at one point was the holder of the national, European, Commonwealth, World and Olympic titles, Joanna Rowsell Shand MBE is clearly one of life’s winners and her self-confidence, determination and get-up-and-go attitude all come through when she stands up in front of an audience.

"Joanna was absolutely brilliant and perfect for our event. I think the staff really enjoyed what she had to say and she did a great job for us. We were so pleased and I hope you will pass on our sincere thanks"