Highly regarded as the face of English netball, Pamela Cookey is best known for her performances in the Commonwealth Games England netball team. With an impressive 11-year netball career to her name, Pamela has rightfully earned a spot in sporting history. After retiring from her beloved sport as a top-class goal shooter, Pamela devoted her time to being a sports pundit for companies such as the BBC and Sky Sports.

Pamela Cookey
Highly regarded as the face of English netball, Pamela Cookey is best known for her performances in the Commonwealth Games England netball team. With an impressive 11-year netball career to her name, Pamela has rightfull 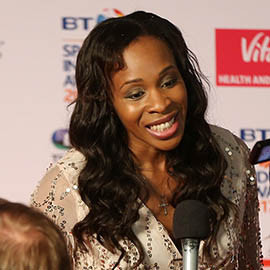 Pamela found her love for netball in her teenage years. She began playing the sport for Team Bath in 2006 and with the team she claimed two Netball Superleague titles. At age 17 Pamela was surprisingly chosen to represent England on the national netball team. She was meant to participate in the 2002 Commonwealth Games, however, a knee injury prevented participation. Pamela eventually made her debut for the team in 2004 in a match against Australia. At the 2006 Commonwealth Games, Pamela was again selected to play, and Pamela went on to win bronze with her team. Four years later in 2010, Pamela had the chance to compete at the 2010 Commonwealth Games. She again delivered an impeccable performance, with the team claiming another bronze medal.

Pamela was also chosen to compete in the 2010 World Netball Series, with the team going on to claim the silver medal. A year later Pamela returned to the competition and the team went home victorious with the gold medal. A prominent memory in Pamela’s netball career was made during the Vitality Netball Super League, as she became the only player to have won seven league titles.

Upon retiring from netball in 2016 Pamela did not want to leave her passion behind. She decided that she would devote her time to sharing her knowledge of such a fast-paced sport with the general public. She accepted roles as a pundit on both the BBC and Sky Sports, keeping her passion for netball burning bright.

Alongside her punditry work, Pamela has also dedicated some of her time to become the director of netball for the Seven Stars Franchise. She also spares time to visit a number of schools where she imparts her wisdom regarding the sporting world, inspiring the next generation to get into the sport.

As an Olympic speaker, Pamela is able to share insight into what it takes to succeed in elite sport and how to achieve peak performance. Able to cover topics such as drive, determination, success, overcoming adversity and training for elite sport Pamela is guaranteed to leave a lasting impression on any audience member.

"Pamela is an inspiration to young athletes but also so many other people in different walks of life. Having reached the dizzy heights of international netball, she also suffered countless injuries but she never let them stand in her way of achieving her goals. Pamela is honest and engaging and the SportsAid supporters in Cambridge enjoyed listening to her enthralling story which she delivered in an articulate and engaging style."

"Evening was great thanks - lovely evening. Pamela was fab and the girls and parents enjoyed her speech."