A former sprinter for England and Great Britain, Paula Dunn excelled in the 100m, 200m and 4 x 100m relay. At the 2012 Paralympic Games in London, the Olympic speaker was one of the coaches who helped the team to finish in third place. As an athlete, Paula won countless medals including a memorable gold medal at the 1996 Commonwealth Games in Edinburgh. Now spending lots of her time as a speaker, Paula often discusses the drive and determination required to be a top athlete.

Paula Dunn
A former sprinter for England and Great Britain, Paula Dunn excelled in the 100m, 200m and 4 x 100m relay. At the 2012 Paralympic Games in London, the Olympic speaker was one of the coaches who helped the team to finish 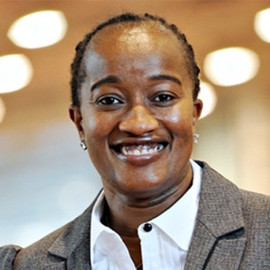 Overall, she won five medals at the Commonwealth Games but it was Edinburgh where she cemented her self in the history books. Earning a silver medal in the individual 100m race, Paula went one better in the 4x100m relay as her and the team won gold. An expert in the importance of teamwork, Paula often discusses how vital teamwork is to become successful.

Paula won a silver medal in the 1990 Commonwealth Games in Auckland for the 100m event. In the same year, Paula won a bronze medal representing Great Britain in the European Championships in Split, Croatia, in the 4 x 100m relay.

She was also UK National Champion in the 100m in 1986, 1987 and 1988 and in the 200m in 1987 and 1988. In the same two years, Paula was AAAs Indoor Champion in the 60m. Having enjoyed a career filled with success, Paula now uses her own experiences to try and inspire audiences across the world. She often discusses vital topics such as peak performance and uses examples from her athletics career to inspire others.