Former Great Britain 110m hurdler and gold medal winner Andy Turner has a great story to tell, making him the ideal Olympic speaker for any private event or conference you are planning. An expert athlete, he is well versed in such skills as peak performance and overcoming personal challenges, two topics which he explores as a speaker.

Andy Turner
Former Great Britain 110m hurdler and gold medal winner Andy Turner has a great story to tell, making him the ideal Olympic speaker for any private event or conference you are planning. An expert athlete, he is well vers 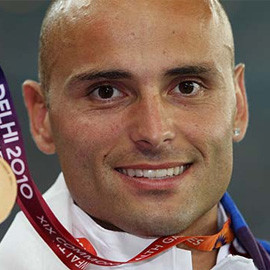 Confident and personable, audiences are enthralled by Andy’s presentations, as he offers an insight into elite sport and his Olympic journey. Competing in three Olympic Games, Nottingham-born Turner retired from athletics at the end of 2014, not before winning a series of medals. Starting in the mid 2000s, Andy competed in the 2006 Melbourne Commonwealth Games and the 2006 Gothenburg European Championships, where he won bronze medals in the 110 metre hurdles.

After he retired, Andy took to building up his body, going from a slim sprinter to a fierce competitor – in six months he put on 10kg of muscle and around the same amount of body fat. He also forged a highly successful career as an Olympic speaker where audiences of many kinds have reacted warmly to his brilliant delivery of stories and anecdotes that amuse, entertain and inform. Andy is perfect for a wide range of events, including school assemblies, business conferences and industry events, due to his likeable nature and confident presenting style.