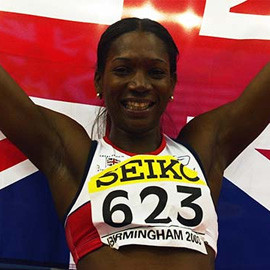 She is regarded for her charisma and confidence, which, coupled with her interesting topics, make her a popular speaker. She can appear at a wide range of events, from business conferences to industry events, where she shares her captivating story of elite sport. When she was at her athletic peak, Ashia set 20 British records for triple jumping and at one stage was a world record holder with a jump of 15.16m – both achievements a testament to her unbeatable sporting prowess.

She made her mark on athletics, specifically hurdling, at the 1997 Paris World Indoor Championships, where she won a silver medal. One of the reasons that the public loved Ashia so much when she was competing is that the Olympic speaker would often leave it to her last jump before she won or held on to her title, the most exciting example being in the 2002 Commonwealth Games where she had to beat a jump of 14.82m and achieved 14.86m. Ashia is an expert at keeping audiences on the edge of their seats, and hooked on her every word.

After this, when she won her second Commonwealth Games gold medal, Ashia retired and in 2003 she was given an MBE in recognition of her contribution to sport. Since then, Ashia has appeared on many TV programmes – including We Are The Champions, Loose Women and A Question of Sport – and has earned a reputation as a fascinating Olympic speaker. She is also a keen property developer, a mentor to junior athletes, and is on the board of Sport England.