Charlotte Dujardin is a horserider like no other. As a member of British Elite in dressage, she is frequently booked to share her knowledge at sporting events nationwide. Calculated and calm, she effortlessly navigates the stage as she does the arena, showcasing consistent control over the discussion. Charlotte is famed for her popular masterclasses, which take her audience through essential dressage skills as she is doing them, miked up and ready to ride.

Charlotte Dujardin
Charlotte Dujardin is a horserider like no other. As a member of British Elite in dressage, she is frequently booked to share her knowledge at sporting events nationwide. Calculated and calm, she effortlessly navigates t 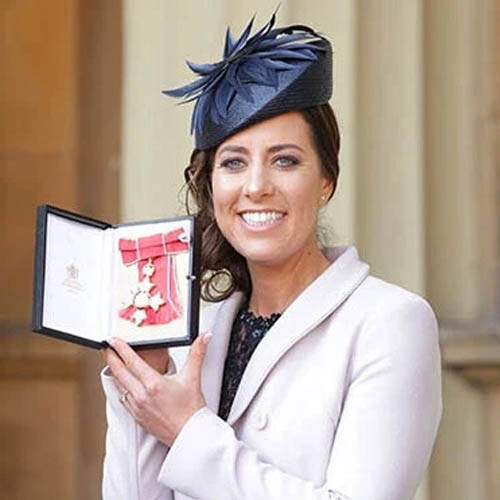 Born and educated in Bedfordshire, Charlotte started riding at the young age of two, when she would ride her older sisters’ horse from the ring to the horsebox. Her first victory was aged three, when she came second in her first Pony Club showjumping competition.

Upon leaving school, Charlotte won the Horse of the Year Show competition four times, as well as securing first place at the All England Jumping Course at Hickstead three times. It was Charlotte’s trainer who encouraged her to try dressage, which then led her to be coached by Carl Hester, an Olympic rider.

In 2011, Charlotte was paired with Valegro, a Dutch Warmblood gelding who would shape Charlotte’s future as an athlete. Though at first she was only supposed to develop the novice horse, it wasn’t long before Charlotte rode Valegro in their first dressage Grand Prix. At 16.2hh, Valegro remained unbeaten since the 2012 CDI Kapellen, all the way to his retirement in 2016 after the London International Horse Show 2016.

Whilst paired with Valegro, Charlotte achieved gold in such competitions as the 2014 Lyon Dressage World Cup, 2015 Aachen European Dressage Championships, 2014 Normandy World Equestrian Games, 2016 Rio de Janeiro Olympic Games. As a speaker, Charlotte is respected for her authentic advice and charming personality. Her passion for horses and dressage is infectious, leaving her audience eager to try their hand at the sport.