Chris Froome is a British road racing cyclist, well known for competing in the Tour De France and Giro d’italia as well as the Olympic Games. Since becoming a professional aged just 22, Chris has gone on to earn a number of victories which have earned him a reputation as a committed and passionate sportsman.

Chris Froome
Chris Froome is a British road racing cyclist, well known for competing in the Tour De France and Giro d’italia as well as the Olympic Games. Since becoming a professional aged just 22, Chris has gone on to earn a number 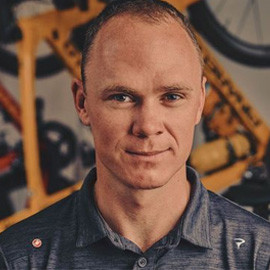 Chris Froome is a British road racing cyclist, well known for competing in the Tour De France and Giro d’italia as well as the Olympic Games. Since becoming a professional aged just 22, Chris has gone on to earn a number of victories which have earned him a reputation as a committed and passionate sportsman.

Chris began his professional career with the Konica Minolta cycling team, before joining Barloworld in 2008. After a brief period with Barloworld, Chris moved to Italy where he cycled under a British licence. 2010 brought Chris’ big break in the cycling world, getting the opportunity to join Team Sky. He soon became one of the teams most prominent cyclists, forging a name as a Grand Tour contender after he finished second overall, before being promoted to first place, in 2011 Vuelta a España.

A year after his breakthrough, Chris had the opportunity to participate in the 2012 Tour De France. In the tour he rode as a super-domestique for Bradley Wiggins, winning stage seven of the tour and coming second overall. Chris also had the opportunity to compete in the road race event at the 2012 London Olympic Games representing team GB. In the time trial event Chris won the bronze medal, which earned him selection for Team Sky’s leader at the Vuelta a España where he hoped to win his first Grand Tour. He was a promising contender to win, however, he claimed fourth after a stiff competition.

In 2013 Chris competed in the Tour Of Oman, where he finished victorious with the first stage race victory of his career. Chris’ success continued after this win, continually proving his talent with wins in the Critérium International, Tour De Romandie and the Critérium du Dauphiné. In 2015 Chris competed again in the Tour De France, considered a favourite to win after past cycling performances. Throughout the tour Chris delivered an impeccable performance, going on to claim his second Tour De France victory.

2016 saw Chris compete in the Tour De France once again, with fans hopeful that he would deliver a winning performance once again. Chris was able to deliver the win for his fans, claiming his third Tour De France win. Also in 2016, Chris had the opportunity to attend the Rio 2016 Olympic Games, competing in the Men’s Time Trial event. He was successful in the event, claiming another bronze medal for his efforts. After this Chris competed in the 2017 Tour De France, claiming yet another win in the tour.

Another two victories came Chris’ way after the Tour De France, going on to become the first British rider to win the Vuelta a España in 2018 as well as winning the 2018 Giro D’Italia. His Giro win was also significant, claiming the title of the first British cyclist to win the title and the first cyclist to hold all three Grand Tour titles since 1983. Chris was then, unfortunately, victim to an accident on the track, fracturing his right femur, elbow and ribs. Chris underwent a series of rehabilitation and is set to return in the UAE Tour 2020.

With a diverse history in the sport, Chris is the perfect candidate for an Olympic speaker at your next event. Able to cover topics such as drive, determination, passion, training for elite sport, overcoming adversity and what it truly takes to be an elite sportsman Chris is guaranteed to leave a lasting impact on an audience of any size.