Olympic speaker Anthony Joshua MBE is a British professional boxer best known for cruising to a golProfed medal at the 2012 London Olympic Games. The current WBC International and Commonwealth heavyweight champion, he only began boxing in 2007, aged 18, when his cousin suggested he take it up.

Anthony Joshua
Olympic speaker Anthony Joshua MBE is a British professional boxer best known for cruising to a golProfed medal at the 2012 London Olympic Games. The current WBC International and Commonwealth heavyweight champion, he on 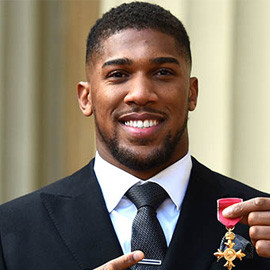 Anthony rose quickly through the ranks of amateur British boxing, winning the Haringey Box Cup in 2009 before retaining it the following year, alongside clinching the senior ABA Championships. During the 2011 Baku World Amateur Boxing Championships, Azerbaijan, the Olympic speaker marked his sudden arrival on the world scene when he beat the reigning world and Olympic champion Roberto Cammarelle. Anthony went on to stop Erik Pfeifer of Germany in the semis before losing by a single point to a local boxer, Magomedrasul Majidov, winning a silver medal.

It was a year later when Anthony exploded into the public’s consciousness by steamrolling into the super heavyweight boxing final at the London 2012 Olympics, before seeing off Cammarelle once again to clinch one of the most coveted gold medals of the Games. His stunning display at his home Olympics saw him appointed Member of the Order of the British Empire in 2013, the same year that he turned professional, and to this day he remains undefeated with a record of 14-0.

With incredible talent and inspirational determination, Anthony is the ideal candidate as an Olympic speaker. He fought back from the disadvantages in his life to become a world champion and earn a place in the British boxing hall of fame. His life experience makes him an expert in overcoming adversity and personal challenges, to ultimately rise successful. Anthony can motivate audiences to value their capabilities and embrace every opportunity.