Chris Boardman is probably best known for winning the cycling gold medal at the 1992 Barcelona Olympic Games. Now a popular Olympic speaker, Chris won the first cycling gold medal for Britain in 72 years. At the time, he was riding a Lotus bike and wearing what is now an iconic pointed helmet. Between his first Olympics and the 2008 Beijing Olympic Games, Chris won three stages of the Tour de France and set numerous world records, some of which have not been broken to date. 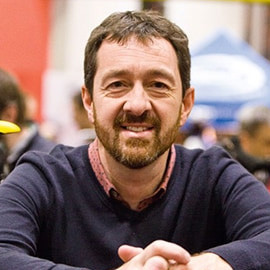 Probably Britain’s most successful professional cyclist, these days Chris is not just entertaining audiences as an Olympic speaker but is also a recognised writer, airing his journalistic skills in such publications as Pro Cycling and Diver. Chris has also been called upon on many occasions to commentate on cycling events for both the BBC and ITV, and he has founded the renowned Boardman Bikes.

When he’s not managing his business and doing archery, cave diving or running, Chris has a seat on the National Cycling Strategy Board. The Olympic speaker’s experience is valued by many in the world of cycling.

His career spans from winning the 10-mile National Schoolboy Championship in 1984, to his final year riding when he achieved the 2000 Manchester World Hour Record.

Additional highlights of his career include representing Great Britain at the 2000 Sydney Olympic Games, coming second in the Grand Prix Eddy Merckx with Jens Voigt, second in Stage 1 of Paris-Nice and fourth in the World Time Trial Championship in France.

As a keynote speaker, Chris specialises in producing high-performance teams and inspiring excellence. As an expert in positive workplace culture, Chris’ corporate clients praise him for his insight into teamwork and leadership. Armed with decades’ worth of experience competing, he can offer strategies to calculating risk and maximising success.

"Chris delivered an excellent presentation with some great messages which very clearly landed with the audience (they are still being repeated back to me!). Chris was engaged and personable the whole time - very down to earth and therefore credible."

"Chris proved a superb choice of keynote speaker at our seminar. We delivered on the brief in an engaging, inspirational and entertaining fashion which really helped us set the tone for the rest of the session."