Daniel Keatings
Daniel Keatings is as talented at competing as he is public speaking, effortlessly captivating his audience with his story of success. This dedicated British athlete has competed at a wide range of events, including the 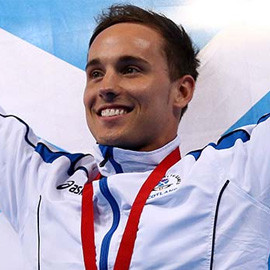 As an Olympic speaker, Daniel expertly discusses numerous topics, from maximising success to maintaining motivation in the face of challenges. Amongst his other achievements, Daniel won a silver at the 2009 Milan European Gymnastics Championships, as well as a bronze medal for his pommel horse final performance.

In the same year, Daniel was sponsored by Opus Energy, meaning that he could expand his options for events. Again in 2009, Daniel competed at the 2009 London Artistic World Championships. Performing in front of his home crowd, the talented gymnast became the first British gymnast to win a medal in the all-around event, taking silver with a record score of 88.925.

Showing no signs of slowing down, Daniel then became the first British athlete to win a gold medal on the pommel horse, at the 2010 Birmingham Senior European Championship. Whilst attending the 2014 Glasgow Commonwealth Games, Daniel represented Scotland in the gymnastic round. He won a silver medal in the team competition and silver in the individual all-around final.

As a speaker, Daniel reflects upon his highly successful career. Passionate, dedicated and knowledgeable, his extensive experience of peak performance makes him the idea sports speaker. For corporate audiences, Daniel’s methods for productive teamwork can help to produce high performing teams within your business.