There simply is not enough room to list all 33 of the medals that swimmer and Olympic speaker David Roberts CBE has won over the years. Noted as one of Great Britain’s most successful Paralympians ever, David is highly regarded for his dedication and commitment to sport, a sentiment which he inspires in his public speeches.

David Roberts
There simply is not enough room to list all 33 of the medals that swimmer and Olympic speaker David Roberts CBE has won over the years. Noted as one of Great Britain’s most successful Paralympians ever, David is highly r 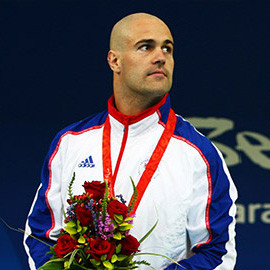 Over the course of three Paralympic Games, David has won an astonishing 11 gold medals. David was diagnosed with cerebral palsy at a young age, turning his future around. To help with his physical therapy, he was encouraged to take up swimming. It was this that set the foundation for his Paralympic success.

Hailing from Wales, David’s most impressive single medal haul was at the 2004 Athens Paralympic Games where the sports speaker won a silver in the men’s 200m individual medley and four amazing golds in the 50m freestyle, 100m freestyle, 400m freestyle and 4 x 100m freestyle relay.

In recognition of David’s staggering achievements, he has been asked to appear on TV many times, has carried the flag of Great Britain at the 2008 Beijing Paralympics, and the Paralympic Games flame in London, 2012. In recognition of his services to sport, David was appointed MBE in 2009, then CBE later in the same year. Additionally, he was inducted into the Welsh Sports Hall of Fame.

David is an advocate for those with disabilities, which sent him to address the Human Rights Council in Geneva, and heavily influences his public speeches.