Audiences are enthralled by Danny Crates, especially when he recounts his story of losing his right arm in a car accident, then taking up athletics to win gold medal after gold medal. Four years after his 1994 accident, Danny won a silver medal in the 4 x 400m at the World Championships. Two years later, he won a bronze in the 400m at the 2000 Sydney Paralympic Games.

Danny Crates
Audiences are enthralled by Danny Crates, especially when he recounts his story of losing his right arm in a car accident, then taking up athletics to win gold medal after gold medal. Four years after his 1994 accident, 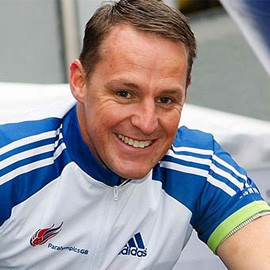 As a testament to his perseverance, Danny’s ability to overcome personal challenges is an inspiring topic in his keynote speeches. As an event host, Danny ensures that events run smoothly, professionally and leaves audiences utterly entertained. Armed with his witty, cheeky Essex humour, he tailors his speeches to your specific event. Danny also frequently visits schools up and down the country, using his nearing 20 years of experience to engage with children and young adults. He understands how to motivate young people, using his story of success to instil an improved perspective of their capabilities.

At the 2001, 2003 and 2005 European Championships, Danny won gold in the 400m and 800m. Danny also won the 800m gold medal at the 2003 World Indoor Championships and at two Paralympic World Cups, bettering his previous silver medal from 2005. The Olympic speaker repeated his gold-winning feat at the 2004 Athens Olympic Games and the 2006 World Championships. Showing no signs of slowing down, Danny also broke the 800m world record.

Other achievements of this incredibly competitive and committed athlete include carrying the Olympic torch in the London relay in 2008, carrying the flag at the opening ceremony of that year’s Summer Paralympics in Beijing, and running in the London Grand Prix the following year, after which he retired from athletics. After retiring, Danny’s media career flourished, starting with commentary for Paralympic events. He published an autobiography titled Danny Boy, which discusses his recovery journey. As a motivational speaker, Danny expands upon the sentiment in his book, travelling to events from Malaysia to Dubai. For corporate audiences, he offers methods for building a high-performance team and cultivating a positive workplace culture.

​"I just wanted to get in contact to say a huge thank you for your presentation and talk on Thursday evening. The content and messaging were extremely relevant to the sales team in the room and an excellent mixture of sentiment and humour, and everyone learnt a lot around motivating themselves, breaking down big goals into easy to manage milestones. All of the feedback has been very positive and you set the launch off to a brilliant start and got everyone into the winning mindset, so for that, I am very grateful!"

“Danny Crates was one of the most inspirational guests at our recent Power to Perform week. His talk was incredibly inspiring and applicable to everybody, proving that no hurdle in life is impossible to overcome. His charm, humour and honesty were met with approval by a very engaged audience and I know that each person left having been motivated and touched by Danny’s unique story.”

"Danny presented at three staff events, speaking to almost 500 employees in total, and each time the response from our guests was overwhelmingly positive.  Danny is very comfortable, genuine and engaging, both in front of an audience and when speaking individually to our guests.  His presentations were incredibly inspiring and motivating, and were delivered with a wonderful mix of sincerity, clarity and good humour. Prior to the events Danny made sure he understood our brief, he asked all the right questions, and his presentation reflected this. He was a pleasure to work with, and I am looking forward to having the opportunity to work with him again."

"Our yearly kick off meeting is a highlight on the calendar to motivate the commercial teams for the year ahead. However, with the challenge of Covid 19, structural changes and a virtual setting we were challenged with our normal delivery mechanism. We enlisted the help of Danny (for the second time in 7 years) to deliver an online motivational talk with a softer Q&A vodcast interaction. His personal stories and energy allowed the audience to connect with him in these difficult times. His messages of managing yourself during adversity and setting targets to maintain focus resonated through the organisation. As always Danny was a pleasure to work with and the reason we brought him back into the team and I don’t rule out a third sales meeting!"

"Danny gave a superb presentation and Q&A session to the staff at Rutherford Briant. Danny has a captivating story and great style and humour in presenting it. His philosophy of making incremental gains really resonated with all of the team. Everyone who attended found Danny to be highly motivational, inspirational and a great example of how someone so down to earth and likeable can overcome and achieve so much through a positive mindset, goal setting, persistence and hard work.  I would strongly recommend Danny to any business looking for an energetic way to motivate and inspire their staff"