Lord Chris Holmes is famed for his career as a Paralympic swimmer and is branded with the title of Britain’s most successful Paralympic swimmer. Such a title was earned through an impressive tally of medals, with nine golds, five silvers and one bronze medal in Chris’ collection. Since retiring from swimming Chris played a significant role in the organisation of the 2012 London Paralympic Games and has even become a politician, taking on the title of Lord Holmes of Richmond as part of the House Of Lords. 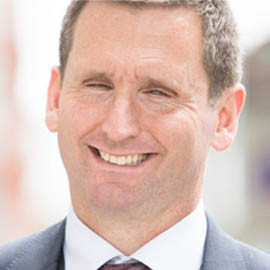 Upon retiring from competitive swimming Chris worked as a journalist before becoming a qualified commercial lawyer. As a lawyer, he specialised in employment and pensions, alongside taking on a role in the Disability Rights Commission. Due to his Olympic success, Chris was appointed an ambassador for London 2012 Paralympic Games and Director of Paralympic Integration in 2009.

In 2013 Chris decided to venture into the realm of politics after the Prime Minister invited him to join the House of Lords. He was appointed Lord Holmes of Richmond and devoted his time to issues surrounding education, employment, skills, media, sport and digital opportunities. As well as political commitments, Chris also shared his time with the Future Talent Steering Group. This is an organisation that aims to provide thought leadership in relation to developing opportunities in a changing world.

A key interest of Chris’ is being an advocate for disability, and he has involvement in a number of campaigns that promote accessibility and celebrate diversity. His interests and qualifications gave him the opportunity to take on the role of non-executive director at the Equality and Human Rights Commission. Here he was responsible for a number of inclusion and diversity programmes, which appealed to his passion for disability advocacy.

With such a diverse history Chris is the perfect candidate for an Olympic speaker at your next event. With knowledge across a range of different sectors, from politics to sport and law to journalism Chris is guaranteed to leave a lasting impression on any audience member.