Ellen White is famed for playing football on a number of prolific footballing teams such as Chelsea, Leeds United, Arsenal, Notts County, Birmingham City and Manchester City. She has also been the recipient of caps for the England international team and the Great Britain Olympic team. A committed and driven sportswoman, Ellen has established herself quite a reputation in the sporting world.

Ellen White
Ellen White is famed for playing football on a number of prolific footballing teams such as Chelsea, Leeds United, Arsenal, Notts County, Birmingham City and Manchester City. She has also been the recipient of caps for t 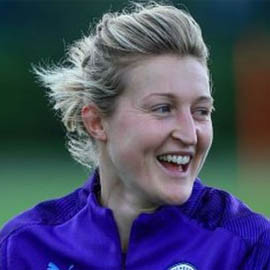 Ellen found her love for football at a young age when she began playing at her father’s soccer academy, Mini Dux. After developing and nurturing her talent, Ellen went on to play for Aylesbury Town. Whilst playing for Aylesbury Town, Ellen impressed the masses and was even spotted by scouts from Arsenal Ladies aged only 8 years old. Ellen played with Arsenal from 1997 to 2005, before she moved to Chelsea. At Chelsea Ellen continued to thrive, claiming the title of Chelsea Ladies top scorer for three seasons.

After Chelsea Ellen moved to the Leeds United team, however, injury ruled her out of the competition for a brief spell. After recovery she returned on top form, scoring two goals which helped secure Leeds’ win in the FA Women’s Premier League Cup 2010. In 2010 Ellen was delighted to find that she would be returning to play for Arsenal Ladies once again. She truly thrived with this team, winning three league titles as well as two FA Cups with the team.

As the 2014 season neared Ellen transferred to Notts County, securing a three year deal with the team. Her time here was unfortunately plagued by injury, and in 2017 she moved to the Birmingham City team. Ellen’s top form returned with the team, scoring a crucial penalty which saw Birmingham reach the 2017 FA Women’s Cup Final. In 2019 she moved to Manchester City, where her first goal was against her old team Birmingham City.

As well as playing for those teams Ellen also had caps for the England international team. Having played for the under 17, under 19, under 20 and under 23 England teams it was without a doubt that Ellen would play for the senior team. She had the opportunity to play in the 2011 FIFA Women’s World Cup, the 2015 Women’s World Cup, the 2017 Women’s Euro, the 2018 SheBelieves Cup and the 2019 Women’s World Cup for England. She was also selected to play in the Great Britain team for the 2012 London Olympic Games, with the team finishing as quarter-finalists.

As an Olympic speaker, Ellen is able to inform audiences of what it takes to be an elite sportswoman, how to deal with pressure in a high profile environment and how to maximise peak performance. With a varied career behind her, Ellen is guaranteed to entertain a range of event audiences.