Fran Kirby is best known for her time spent playing football for prolific teams such as Chelsea and the England national team. After representing England in a number of prominent matches, Fran has earned a reputation as a committed and driven sportswoman.

Fran Kirby
Fran Kirby is best known for her time spent playing football for prolific teams such as Chelsea and the England national team. After representing England in a number of prominent matches, Fran has earned a reputation as 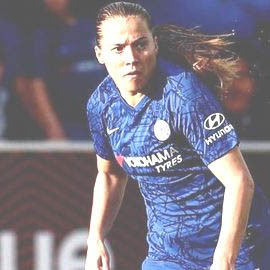 Fran first began playing football for the Reading football club, working her way through the youth teams before making her debut on the senior team aged 16. Tragically Fran’s mother passed away the following year, and Fran quit the sport due to an onset of depression. After time to mourn her mother and recover, Fran returned to the football pitch in 2012 determined to do her mother proud. Such drive saw Fran become the FA Women’s Premier League Southern Division top scorer, during the 2012-13 season.

Fran was a pivotal player in the Reading team, helping them to achieve the third position due to her 24 goals that she scored in just 16 appearances. Not long after Fran was given a professional contract from the club, becoming the first female player to receive a professional contract from them. In award for her hard work throughout the season Fran was named the WSL2 Players’ Player of the Year 2014.

Fran’s talent continued to thrive, continuing her evident skill for goalscoring in the 2015 Women’s Super League season. She got to play in the 2015 FIFA Women’s World Cup with the team before she was transferred to the Chelsea football team. She made her first impressive performance for the team in October of 2015, scoring two goals to secure Chelsea’s first Women’s Super League title. They claimed a league and cup double, a significant achievement for the team and Fran alike. Fran continued to play impeccably in the following seasons, and her efforts were rewarded with both the PFA Players Player of the Year 2018 award and the Football Writers’ Women’s Footballer of the Year 2017-18.

Fran also earned a number of caps from the England national team. In her youth career, she became a part of the Under-23’s squad before making her senior team debut in a match against Sweden in 2014. She was named in the 2015 FIFA Women’s World Cup squad, with the team finishing in third place and giving her a taste for international competition. She remained in the England national team for the following seasons, playing in the UEFA Women’s Euro 2017 and 2018 friendly match against Brazil. Fran also had the opportunity to play for the Great Britain team, claiming a gold medal at the 2013 Summer Universiade.

Throughout her career, Fran has shown just what drive and determination can achieve. Faced with adversity at such a young age, Fran never let such adversity stop her and she has since gone on to achieve greatness. With such talent and devotion, Fran is a hopeful for the football team at the 2020 Tokyo Olympics and is also a perfect candidate for an Olympic speaker at your next event.