Long jump specialist and Olympic speaker Greg Rutherford has five gold medals to his name, including one at the 2012 Olympic Games in London. As an Olympic speaker, Greg reflects upon his experience of elite sport, describing the skills needed to succeed and how he achieved them. Boasting an impressive sporting track record and popular media career, he is the ideal speaker for a wide range of events. 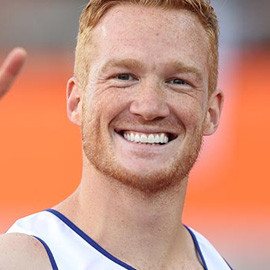 Long jump specialist and Olympic speaker Greg Rutherford has five gold medals to his name, including one at the 2012 Olympic Games in London. As an Olympic speaker, Greg reflects upon his experience of elite sport, describing the skills needed to succeed and how he achieved them. Boasting an impressive sporting track record and popular media career, he is the ideal speaker for a wide range of events.

With his grandfather and great-grandfather being professional footballers – both of them playing for Arsenal and his great-grandfather playing for England 11 times – Greg tried out for Aston Villa football club at an early age but decided that his future sports career lay in athletics. In his speeches, Greg discusses the journey that led to him being an athletic star, inspiring audiences to embrace their own aspirations.

As impressive as Greg’s achievements have been, he could have done so much more if it wasn’t for a string of injuries, to his hamstring in particular and even to his tonsils. As a speaker, he uses these experiences to motivate audiences to overcome their own challenges. His presentations reflect the determination and professionalism that Greg has put into these amazing achievements.

"Greg was brilliant and completely stole the show"

“Greg was bloody wonderful! Brought real energy to the room with his personality and active engagement with the audience. He was a strong end to the day and having him stay to present the awards to the colleagues was a wonderful gesture making that moment even more special for them. A great story, lots of humour and nice anecdotes all told incredibly eloquently and with a great smile! Opened up the room for questions which went down really well, and he definitely won the room over! 50% of the room (at least) were ‘drooling’! Such a gentleman too. He was an absolute pleasure to work with, pre, during and post the event…he even gave one of the team a lift to the station! The post-event feedback on Greg’s session has been resoundingly positive. People still talking about it! So a huge personal thanks to him from me – he absolutely made an important conference a very enjoyable and memorable one. Priceless. I would highly recommend Greg to anyone wanting an uplifting close to their conference. Great value for money.”

"We were very pleased with speech day. Greg gave a great speech and I’m sure the children will remember the phrase “fat don’t fly” for years to come! He was very generous with his time meeting the children, posing for photographs, etc after his speech. Thank you for your efficient organisation."