When you are brought up learning how to swim, ride and shoot there is really only one Olympic sport that you can choose as a career. Heather Fell is a world-beating pentathlete, who used her multifaceted armoury of skills to reach the top of her sport. These days, she is a highly successful Olympic speaker who draws audiences in with her fascinating stories from one of the toughest disciplines in the world of sport.

Heather Fell
When you are brought up learning how to swim, ride and shoot there is really only one Olympic sport that you can choose as a career. Heather Fell is a world-beating pentathlete, who used her multifaceted armoury of skill 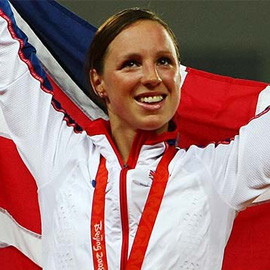 With a degree in physiotherapy, Heather has made the pentathlon her own, winning medals in all of the top competitions. At the 2008 Olympic Games in Beijing, Heather won a silver medal in the women’s individual event and at the World Cup in the same year, she earned a bronze and gold, which followed her bronze in 2007. Her experience of elite sport makes Heather an invaluable speaker, who can offer methods for maintaining calm under pressure, integral in a business environment.

And in the World Cup Final, she won silvers at Lisbon in 2008 and Chengdu in 2012. Most recently, Heather earned a gold medal at the 2018 European Championships in Glasgow, becoming European Sprint Triathlon Champion in the 35-39 women’s age category. As an Olympic speaker, Heather enraptures audiences with her insight into achieving success, performing under pressure, coping with adversity, and how to be self-motivated and driven. Heather sprinkles her talks with many humorous anecdotes about her life and career.