British pole vaulting record holder and Olympic speaker Holly Bradshaw has enough competition medals to lose count, including an incredible 10 gold medals. As an Olympic speaker, she reflects upon her experience of top-level competing, offering her audience methods of peak performance inspired by her skill development. Her passion for sport is infectious, leaving audiences eager to embrace their own sporting opportunities. 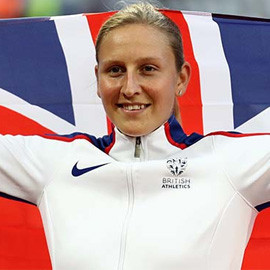 A brilliant Olympic speaker who entertains audiences with stories from her time at the very pinnacle of athletics, Holly achieved two more gold medals at the Aviva European Indoor Trials and the Aviva Grand Prix. In the same year, she won a bronze medal at the IAAF World Indoor Championships then came sixth at the 2012 London Olympic Games.

Despite her amazing career progression, Holly would have achieved even more if she hadn’t lost several months dealing with injuries that prevented her from competing. But disappointment and success have helped to give Holly the invaluable insight at the centre of her Olympic speeches. She can candidly discuss the highs and lows of competitive sport, taking her audience backstage at top-level competitions.