Loughborough-based Olympic speaker Joanne Jackson hit the big time when she was just 17 – winning a gold medal for her stunning 400m freestyle performance at the 2003 European Championships. Instantly in the media, Joanne has had to adapt to the life of an Olympian and often discusses dealing with pressure throughout her speeches.

Joanne Jackson
Loughborough-based Olympic speaker Joanne Jackson hit the big time when she was just 17 – winning a gold medal for her stunning 400m freestyle performance at the 2003 European Championships. Instantly in the media, Joann 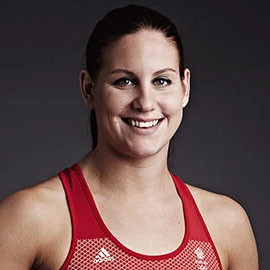 Having competed in a number of Olympic Games, Joanne has become adapt to being under the spotlight, whether it be the media or the public. Clearly, determination and the desire to be at the very pinnacle of her chosen discipline are key components in Joanne’s character. This makes her a superb Olympic speaker who is able to hold any audience in awe and suspense as she recounts her incredible experiences.

Officially retiring in 2012, the Olympic swimmer set up the Joanne Jackson Swim Academy – along with ex-Olympic swimmer Grant Turner – which aims to provide training and support to anyone who wants to improve their swimming abilities.