British athlete, Joey Duck, doesn’t just have a great name, she is also a highly popular Olympic speaker who has a whole string of anecdotes and stories to relate from her experiences at the top of her sport. Not just a talented athlete, Joey is a versatile woman who can bring extra knowledge and energy to any type of event.

Joey Duck
British athlete, Joey Duck, doesn’t just have a great name, she is also a highly popular Olympic speaker who has a whole string of anecdotes and stories to relate from her experiences at the top of her sport. Not just a 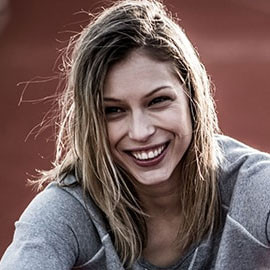 Excelling in the 100m, 200m and 400m, Joey first caught the attention of the world of athletics when – at just 14 years old – she ran the fastest ever 100m in her age group. A year later, Joey was the UK’s number one in the 100m and Europe’s number one in the 200m. Clearly exceptionally talented, Joey had an exciting future ahead of her and was looking to win some of the world’s biggest races.

Joey Duck’s athletics record shows the Olympic speaker regularly coming in first, second or occasionally third, but rarely further back in the field. Joey’s successes are far too numerous to list but in 2015 she achieved five second places, seven first places and two third places. In 2014 she came in first place 12 times, second place five times and third place four times. As a speaker, Joey often discusses the peak performance required to win numerous events but also touches on the drive and determination required to be successful in both sports and businesses.

Joey Duck had significant successes at the Youth Commonwealth Games, the European Junior Championships and the Under-23 European Championships but she, unfortunately, missed out on the London 2012 Olympic Games because of a back injury that kept her inactive until 2013.

A tough setback to come to terms with, Joey regularly discusses dealing with setbacks whether it be an injury or something else. That time gave her the opportunity to build up a reputation as an excellent Olympic speaker and Joey is now looking to the future with renewed vigour.