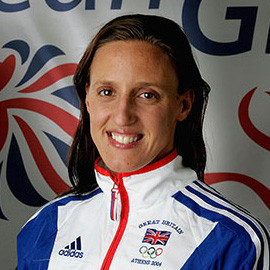 An incredible swimmer but an even better person, Karen has made monumental strides within Great Britain to help improve swimming. As a speaker, Karen is known to discuss vital topics such as teamwork and leadership. Despite breaking her back in 1996 when she was 25, Karen has had a highly successful international swimming career that has spanned two decades. During that time she has won 35 championship medals and 38 national titles.

Taking part in four consecutive Olympic Games, Karen has taken the World Championships by storm time and time again. In 1993, the Olympic speaker won a gold and a bronze medal, in 1999 she won a gold and a silver, in 2000 she won bronze, silver and gold and in 2001 she won a silver and a gold medal. Karen has also held two world records and in 1994 she was given an MBE for her services to swimming. She also won a gold medal in the 4x200m freestyle in 2001.

Having won four World Championship gold medals, Pickering couldn’t go empty handed in the Commonwealth Games. During her illustrious career, she won 13 Commonwealth Games medals which included an impressive four gold medals. Having been successful throughout her career, Pickering is considered an expert in peak performance, a topic she believes is vital to business performance.

After retiring in 2005, Karen Darke began a new career as a TV sports commentator, a highly popular speaker at events, and chair of the British Athletes Commission. Her skills as a presenter ensure her after dinner speeches are powerful and engaging, she can captivate an audience with her wonderful anecdotes and knowledge on a variety of business-related topics.

"Karen talked quite spiritedly about her experience and having had to overcome challenges, it was enjoyable to the whole audience"

"Karen has been a fantastic ambassador for SportsAid and is always incredibly well-received at any occasion she attends on behalf of the charity. The warmth of her personality immediately endears her to any audience and she is, as ever, the ultimate professional"