Mo Farah is one of the UK’s greatest ever athletes, the long-distance runner is a multiple Olympic, European and World champion. The first GB athlete to win three long-distance doubles at successive World Championships and Olympic Games, Mo is part of an exclusive group of athletes that have completed a 5k/10k double win, and the first athlete in history to do so on home soil.

Mo Farah
Mo Farah is one of the UK’s greatest ever athletes, the long-distance runner is a multiple Olympic, European and World champion. The first GB athlete to win three long-distance doubles at successive World Championships a 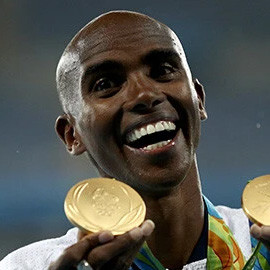 In 2010, Mo entered the spotlight as he became the first British man to run 5,000 metres under 13 minutes, completing the distance in 12.57 minutes. What followed was a triumphant season for Mo, as 2011 saw him become the first British athlete to win the 5,000m in the World T&F Championships. As an Olympic speaker, Mo often touches on the early stages of his career and the drive and determination it required to reach the top.

He went on to smash the European 10,000m record with an incredible time of 26.46 minutes, and improved his own record 5,000m time to 12.53. A year later, at London 2012 Olympic Games Mo made history as he won GB’s first ever gold in 10,000m. A week later, he won the 5,000m race in a time of 13.41, completing the hardest track double, a feat he repeated at Rio 2016. Having broke record after record, Farah has rapidly become one of the world’s most inspiring athletes and aims to inspire audiences across the world with his remarkable story.

Since Rio, he has continued to run some very successful races, including the 3,000m at the Birmingham Grand Prix in August, where he announced he would no longer be competing for GB, by symbolically handing his vest over to teammate Andy Butchart. Instead, he will focus on marathon running, hoping to make a similar impact to what he did on the track. Overall, Mo has won four Olympic gold medals, five European Championship golds and six World Championship golds.

He is not only one of the most decorated long-distance runners of all time, but he is one of the most inspiring figures in the world. A true champion in sport and a humble human being, Sir Mo Farah CBE can provide gripping speeches. He often discusses peak performance and achieving goals by using his own personal success as examples.