Peter Burling is famed for his Olympic and World Championship performances in 49er Sailing representing New Zealand. Widely recognised as one of the most remarkable sailors of this era, Peter has earned the hearts of the nation. With an impressive tally of medals in his collection it is with no doubt that Peter is a talented and dedicated sportsman.

Peter Burling
Peter Burling is famed for his Olympic and World Championship performances in 49er Sailing representing New Zealand. Widely recognised as one of the most remarkable sailors of this era, Peter has earned the hearts of the 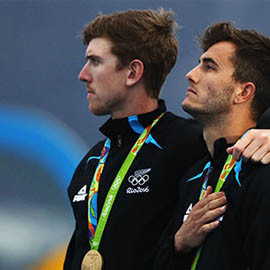 In his adult career, Peter has competed in a number of credible competitions. In 2008 he took to the Olympic stage for the first time, competing at the 2008 Beijing Olympic Games. These games were particularly significant for Peter, claiming the title of the youngest sailing competitor at the games and the youngest sailor to ever represent the New Zealand Olympic Team. Unfortunately, Peter failed to secure a medal position at these games, although the failure compelled him to continue training and bestowed the hope of returning to the Olympics.

That hope became a reality at the 2012 London Olympic Games, where he competed in the 49er Class alongside Blair Tuke. Peter was the youngest 49er sailor at the games and impressively went on to claim silver and New Zealand’s 100th medal. Four years later the duo earned their place at the 2016 Rio Olympic Games with the ambition to claim gold this time. The duo was victorious, claiming the gold medal with an overall 43 point margin.

As an Olympic speaker Peter is able to give insight into a unique sport, informing audiences on how to succeed in elite sport and the methods required in training for such elite competitions. Able to comment on topics such as training for elite sport, Olympic success, drive, determination and becoming a gold medallist, Peter is guaranteed to leave a lasting impact on any audience member.