Andy Tennant is an English professional track and road racing cyclist and Olympic speaker. A world and European prize-winning cyclist, he applies his trade on the velodrome as well as the road, and was selected for the Team GB team pursuit squad at the London 2012 Olympic Games. On the road, Andy has raced for Sir Bradley Wiggins’s British team where he took up the position of one of the lead riders.

Andy Tennant
Andy Tennant is an English professional track and road racing cyclist and Olympic speaker. A world and European prize-winning cyclist, he applies his trade on the velodrome as well as the road, and was selected for the T 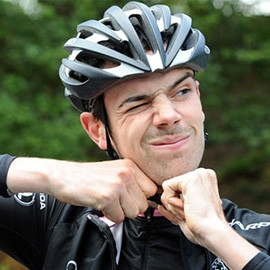 The Olympic speaker competes both nationally and internationally and is a well-established road racer, having secured tour series victories in three consecutive years from 2009. Andrew rode for Teah Halfords Bike Hut alongside Rob Hayles, before moving to team WIGGINS in 2015, founded by Bradley Wiggins, where he prepared for the 2016 Rio Olympics. At the 2016 Glasgow UCI Track World Cup, he won a gold medal in the team pursuit, earned a silver medal and a bronze in the individual pursuits. At present, Andrew rides for the Canyon DHB p/b Bloor Homes team. Founded by Tim Elverson, the highly successful team has helped Andrew go from strength to strength.

In 2010 he went on to further his growing reputation within the international cycling community with his first senior track medals at the World and European Championships. A year later he picked up a European gold medal in the team pursuit, and was crowned World Champion prior to the 2012 London Olympic Games, where he was a part of the gold medal-winning squad. Andrew’s experience of peak performance makes him the ideal speaker. Whereas some may talk in theory, Andrew’s gold medals are a testament to his first-hand experience of maximising of success.

As an Olympic speaker, Andy is a well-spoken, witty and articulate individual who has undertaken a variety of public speaking roles, ranging from school appearances to after-dinner speaking. In addressing an audience Andy likes to recall on his challenging health issues as a youngster and his intense training schedule to truly motivate and inspire all within earshot. Capable of influencing a new perspective in his audience, Andrew is the perfect Olympic speaker for a wide range of events.