Scottish curler, Anna Sloan, is a prominent and highly respected sportswoman. Born in Dumfries, she studied sport at the Glasgow Caledonian University, establishing her extensive knowledge of sport. Since taking a break from competitive sport, she has pursued her career in speaking, featuring as an Olympic speaker at a wide range of events.

Anna Sloan
Scottish curler, Anna Sloan, is a prominent and highly respected sportswoman. Born in Dumfries, she studied sport at the Glasgow Caledonian University, establishing her extensive knowledge of sport. Since taking a break 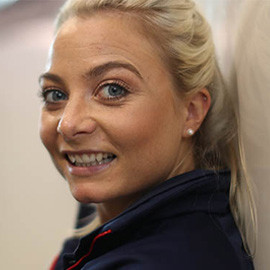 Passionate and dedicated, her knowledge of sport and successful experience of competing makes her an expert on maximising success. Anna’s speaking topics can be easily applied to a business setting, as her advice can be used to improve a team dynamic. Anna’s first experience of competitive sport was at the 2009 Vancouver World Junior Curling Championships for Scotland, where she won the competition.

At the peak of her career, Anna appeared as part of the team Great Britain at the 2014 Sochi Olympic Games, where she earned a bronze medal. As a speaker, Anna reflects upon her experience of top-level competing, inviting the audience into her personal story of success. Her perseverance and self-resilience shine through her speeches, as she passionately recounts the skills needed to rise victorious at an elite level.