First spotted by the Welsh Talent Team, having started her career with her local Abergavenny Road Club, Becky James is a Rio 2016 Olympics double silver medalist, riding for Team GB Cycling Team, her native Wales and the Velosure–Giordana.

Becky James
First spotted by the Welsh Talent Team, having started her career with her local Abergavenny Road Club, Becky James is a Rio 2016 Olympics double silver medalist, riding for Team GB Cycling Team, her native Wales and the 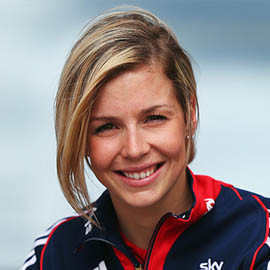 First spotted by the Welsh Talent Team, having started her career with her local Abergavenny Road Club, Becky James is a Rio 2016 Olympics double silver medalist, riding for Team GB Cycling Team, her native Wales and the Velosure–Giordana.

James graduated onto the British Cycling Junior Academy at the age of 15 and soon progressed through the ranks winning numerous British titles. A bout of glandular fever in 2008 cost her a place at the UEC European Junior Track Championships but James made up for that disappointment the following season, winning European Championship Junior gold in the sprint and 500-metre time trial in Minsk, Belarus, and World Junior Cycling titles in the keirin and sprint in Moscow.

Her showing in those UCI World Junior Track Cycling Championships also included a silver medal in the time trial and a new world record of 11.093 in the 200-metre time trial portion of the sprint competition. Her graduation to senior competition continued seamlessly in 2010 as, riding for Wales, she won two medals at the Commonwealth Games as well as returning from the UEC European Under-23 Track Championships in Saint Petersburg, Russia, with a world title in the sprint and silvers in the time trial and team sprint, with Williamson.

However in 2014 she endured a cancer scare and career-threatening injuries to her knee and shoulder. This left Becky’s cycling dreams in jeopardy, but after two years of uncertainty, James made a successful return to cycling in time for Rio 2016. Warming up with a medal in the Kierin at the 2016 World Championships in London, James’ showing at the Rio 2016 Olympic Games included two silver medals and in doing so she announced herself as a leading contender for the world’s best track cyclist and one of the greatest female track cyclists ever to have raced for Team GB.