Racing downhill at more than 80mph was not unusual for Britain’s number one female alpine skier, Chemmy Alcott. She began skating competitively when she was just eight years old. Now retired from the sport after a 20-year career, Chemmy has competed in four Olympic Games. At present, she is now a popular sports speaker, touring the country to share her story of sporting success.

Chemmy Alcott
Racing downhill at more than 80mph was not unusual for Britain’s number one female alpine skier, Chemmy Alcott. She began skating competitively when she was just eight years old. Now retired from the sport after a 20-yea 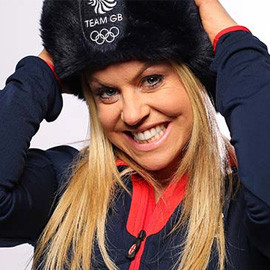 Noted as being passionate about sport and an insightful speaker, Chemmy can confidently discuss such topics as peak performance and maximising success.

At one stage, Alcott was ranked as eighth in the world and she has gone down in history as being the first and only British ski racer to win a World Cup run. Chemmy uses her energy and enthusiasm to get across the message that dreams can be achieved, making reference back to her incredible track record in alpine skiing in her speeches. She is passionate about inspiring an improved perspective in her audience, so uses her experiences to motivate others to value their capabilities.

In the Senior British National Alpine Ski Championships, the Olympic Speaker won an astounding 37 gold medals. In the Super G, she won gold in all but three years between 2001 and 2009. Chemmy also won gold medals in the giant slalom over seven years and the slalom over six. These medals complemented the golds that she won in the Junior British National Alpine Ski Championships, four in 2002 and two in 2001. Her recent achievements include beating Graham Bell in the BBC show, Ski Sunday, taking first in the head-to-head slalom race. As a testament to her talent, Chemmy won 1995 Sunday Times Junior Sportswoman of the Year award.

As an advocate for gender equality and school opportunities, Chemmy has been interviewed on the gender gap and is a brand ambassador for Brighton-based school travel company, Equity. Passionate about creating a foundation of skills like determination, growth and empowerment, she discusses methods for personal development with her audience.

"I just wanted to take this opportunity to say it's been an absolute pleasure working with you, your passion and enthusiasm for what we are trying to do and your commitment to helping young people progress in life is truly infectious. Thanks for your commitment to Equity and for helping us to drive home the life skills and benefits that young people can get from our trips"