Olympic speaker Christine Ohuruogu is a British track and field athlete who specialises in the 400 metres, the event for which she is the former Olympic, World and Commonwealth Champion. Prior to her retirement in 2017, she earned an impressive eight 1st place titles across eight different competitions. As an Olympic speaker, Christine reflects upon her highly successful career, offering her audience an insight into elite sport.

Christine Ohuruogu
Olympic speaker Christine Ohuruogu is a British track and field athlete who specialises in the 400 metres, the event for which she is the former Olympic, World and Commonwealth Champion. Prior to her retirement in 2017, 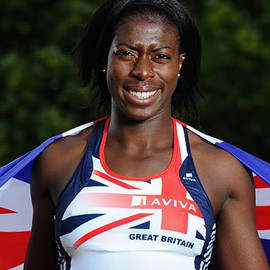 A standout athlete from the very beginning, the London native ran track and played netball throughout her childhood, earning a spot in the London Youth Games Hall of Fame. Beginning her running career aged 20, Christine has been working actively as a sporting professional and sports speaker for more than ten years, her first medal coming at the 2003 Tampere European Junior Championships.

Whilst competing at the 2016 Rio Olympic Games, Christine earned a bronze medal at the 4x400m relay – her last victory before retirement in 2017. Christine’s Olympic performance secured Great Britain’s first medal in the event at the Olympics since 1992. A dedicated and ambitious athlete with an incredible track record, Christine is also a passionate and engaging Olympic speaker – her talks are suitable for perfect for numerous occasions. She has appeared as a guest speaker at charitable fundraisers, private parties and corporate functions.