Now a highly popular Olympic speaker, Drew Sullivan has twice been given the Most Valuable Player (MVP) award by the British Basketball League, the UK’s professional basketball league. As a testament to his skill and dedication, it is the top accolade for Britain’s basketball players. With over 100 international appearances, Drew is the UK’s second most capped player, behind Nate Reinking, and was the team captain at the 2012 London Olympic Games.

Drew Sullivan
Now a highly popular Olympic speaker, Drew Sullivan has twice been given the Most Valuable Player (MVP) award by the British Basketball League, the UK’s professional basketball league. As a testament to his skill and ded 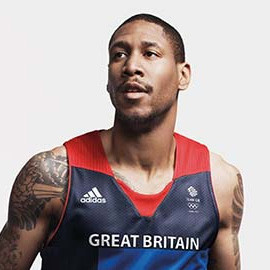 The Great Britain team finished in fifth place, ahead of China and three points behind the winners Russia.

When he wasn’t playing for the national team, Drew represented the Leicester Riders. Other teams that the Olympic speaker has played for include the London Lions, The Mersey Tigers, The Newcastle Eagles, Apollon Limassol in Cyprus, CSK VVS Samara in Russia, Dexia Mons-Hainaut and EiffelTowers Den Bosch (both in the Netherlands), and Joventut Badalona in Spain. Over the last decade, he has played all over the world, for local and national teams, including the Olympic Team GB.

Before getting into basketball, Drew was an eager athlete at school, specialising in the 100m and 200m track events. But by the time he was 13 years old, he had fallen in love with the basketball court, having been blown away by the gold medal-winning USA team at the 1992 Barcelona Olympic Games. The so-called “Dream Team” of those Games included Magic Johnson, Michael Jordan and David Robinson.

From this experience, Drew developed skills in leadership and teamwork, both of which he expands upon in his sports speeches. For corporate clients, Drew can inspire an improved workplace culture through his story of team collaboration.