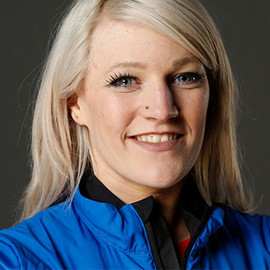 These victories were particularly sweet because two years earlier at the 2014 Sochi Olympic Games, she was disqualified from the 500m after an Italian skater collided with her. Two days later Elise was disqualified again, this time in the 1500m, for failing to cross the finishing line.

Shortly afterwards she was penalised for colliding with a Chinese skater in the 1000m semi-final. After such disappointment, Elise developed the skills needed to overcome adversity – including perseverance, determination and mental strength. In her speeches, she shares these methods with her audience.

Voted the Nottingham Sportswoman of the Year in 2013, Elise had three brilliant years between 2013 and 2016; she won 10 gold medals, 8 silver medals and 4 bronze medals. In all, the Olympic Speaker has collected 25 medals through competing in the European Championships and the World Championships over a six-year period.

As a speaker, Elise captures and holds the attention of audiences when she shares her memories of the highs and lows that she has experienced throughout her career. Delegates from many sectors can relate to how thin the line can be between success and failure, and can empathise with how important it is to face both in the same way.