Olympic speaker and curling star Eve Muirhead has an incredible 13 gold medals, five silvers and a bronze, which she won at the 2014 Winter Olympic Games in Sochi, Russia. As a speaker, she discusses her experience of elite sport, offering audiences strategies to success influenced by her gold medal track record.

Eve Muirhead
Olympic speaker and curling star Eve Muirhead has an incredible 13 gold medals, five silvers and a bronze, which she won at the 2014 Winter Olympic Games in Sochi, Russia. As a speaker, she discusses her experience of el 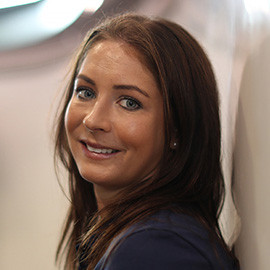 Additionally, at the European Curling Championships, Eve won silver medals in 2010, 2012, 2013, and 2015, achieving a bronze in 2014. And in the World Championships, the Olympic speaker came second in 2010 and first in 2013. Billed in the media as The Ice Queen, Eve curls out of the Dunkeld Curling Club based in Pitlochry. Also famed as the youngest ever skip to win an Olympic medal, the Olympic speaker has proved to be extremely popular with audiences at many different kinds of private and corporate events.

Her stories are utterly captivating. In recent years, Eve earned a silver at the 2019 Perth Scottish Women’s Curling Championships and a gold 2019 Perth Scottish Women’s Curling Championships. She is able to share her experiences at the very peak of her chosen sport, expressing how there is a close line between success and failure. An expert in remaining calm under pressure, corporate audiences benefit from Eve’s influence, improving their workplace culture through Q&A and workshops.