Renowned racing cyclist Graeme Obree is best known for both his skill in professional cycling and his radical innovation in bicycle design. A world record winner in his sport, it is without a doubt that Graeme has earned the hearts of the nation and is both a committed and talented sportsman.

Graeme Obree
Renowned racing cyclist Graeme Obree is best known for both his skill in professional cycling and his radical innovation in bicycle design. A world record winner in his sport, it is without a doubt that Graeme has earned 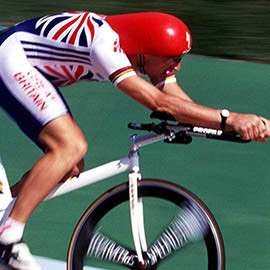 Renowned racing cyclist Graeme Obree is best known for both his skill in professional cycling and his radical innovation in bicycle design. A world record winner in his sport, it is without a doubt that Graeme has earned the hearts of the nation and is both a committed and talented sportsman.

Graeme has had a heavy influence on the sporting world throughout his career. Due to the impact he had on the sporting world it was decided that his life would be dramatised into the film The Flying Scotsman. He also has a documentary about his time in the cycling limelight, titled Battle Mountain: Graeme Obree’s Story. The epitome of courage, it is believed that Graeme is the motivation and inspiration fuelling some of the current greatest cycling stars.

Graeme became determined to claim the world hour velodrome record, hoping to triumph over the current holder Francesco Mosers. His first attempt to beat the record was not successful, falling short of the record by almost a metre. Graeme did not let this stop him however, continuing to persevere until the record was his. Returning to the track with a strong and tough mental stance, Graeme set a new record of 51.596 beating Francesco’s record by an impressive 445 metres.

Graeme has made a number of significant achievements throughout his cycling career. His most significant achievements are breaking the world hour record twice and claiming the title of individual pursuit World Champion in both 1993 and 1995. In 1996 Graeme had the chance to attend the 1996 Atlanta Olympic Games. He also won both the RTTC 50 and 25-mile races.

Graeme is a sufferer of bipolar disorder and has continually battled with depression throughout his career. Despite the adversity that he faced, Graeme has continued to push through and conquer his inner battles. As an Olympic Speaker, Graeme is able to draw upon the trials and tribulations that he has faced in life to motivate and inspire future generations to follow their dreams and get into cycling. With a unique story to tell, Graeme is guaranteed to leave a lasting impression on the guests at your next event.