Katarina Johnson Thompson is famed for her talent in the heptathlon as a British track and field athlete. Having spent time competing at the Olympic Games for Britain, Katarina has earned a reputation as a committed and driven sportswoman, establishing a devoted fan base.

Katarina Johnson-Thompson
Katarina Johnson Thompson is famed for her talent in the heptathlon as a British track and field athlete. Having spent time competing at the Olympic Games for Britain, Katarina has earned a reputation as a committed and 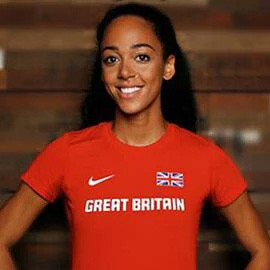 Katarina Johnson Thompson is famed for her talent in the heptathlon as a British track and field athlete. Having spent time competing at the Olympic Games for Britain, Katarina has earned a reputation as a committed and driven sportswoman, establishing a devoted fan base.

Katarina found talent in athletics at a young age, participating in the sport whilst she was still at school. Her first medal victory was taken at the 2009 World Youth Championships, winning gold in the Heptathlon. This started a winning streak for the talented athlete, with her next victory being in 2012 after she broke Jessica Ennis-Hill’s junior record whilst competing at the 2012 Multistars tournament. This record break was very prominent for Katarina, it earned her qualification for the London 2012 Olympic Games in B standard. In June of 2012, Katarina went one step further, earning an A standard qualification after she set six new personal bests. Her last win of 2012 was taken at the 2012 World Junior Championships, taking home the gold medal and the title of World Junior Champion.

Katarina’s first Olympic experience came at the London 2012 Olympic Games, getting the opportunity to compete in the women’s heptathlon. Alongside legends such as Jessica Ennis Hill and Louise Hazel, Katarina left a lasting impression on the audience placing 13th with a score of 6267. This performance put her in the limelight of British athletics and led her on to compete in a number of other prominent competitions. She was awarded the Lillian Board Memorial Award at the 2012 British Athletics Writers Association Awards, rewarding the achievements that she had already made in such a short time.

Katarina competed at the 2013 IAAF World Championships, finishing in 5th place setting a new personal best in the 200m, long jump, javelin and 800m. Her next achievement was made in 2014, setting a new personal best in the long jump with a distance of 6.92m. She also had the opportunity to compete in the prestigious Hypo-Meeting in Gotzis, setting a world-leading personal best with 6682 points. She later competed in the 2015 British Indoor Championships, a prominent event for Katarina which ended in setting a new British high jump record. The record-setting didn’t end there, Katarina went on to set the British long jump record at the Birmingham Indoor Grand Prix later in the year.

She qualified for the 2016 Rio Olympic Games, but unfortunately missed out on a medal place coming in 6th position. She did however set another British record at the games, the British high jump record with 1.98m which would have won gold in the single event. 2018 brought more success for the talented athlete, claiming the title of 2018 World Indoor pentathlon champion as well as titles in the heptathlon at the 2018 Commonwealth Games. She claimed silver at the 2018 European Championships, again impressing with a personal best of 6759 points. Such a performance saw Katarina move into the World all-time top-25. In 2019 she made one of her greatest achievements to date, competing at the 2019 World Athletics Championships she won the heptathlon and claimed the title of World Athletics Heptathlon champion. She was also selected over Dina Asher-Smith and Laura Muir to receive the Cliff Temple Trophy in reward for her dedication to the sport.

As an Olympic speaker, Katarina is able to give audience members an insight into what it truly takes to be an elite athlete. Katarina is the epitome of drive and determination, someone who is able to prove that you can achieve greatness if you truly put your mind to it. With a wide array of personal anecdotes to share, Katarina is guaranteed to leave a lasting impression on any audience member.