Lamont Marcell Jacobs is a professional athlete, widely known for competing in disciplines of 60 and 100 metres. Having claimed countless titles for his talents, Lamont has since been selected to represent Italy at the 2020 Tokyo Olympic Games and set European records with his skills. A truly inspirational athlete who soars to the finish line time and time again, Lamont Marcell Jacobs is a fantastic addition to events of all kinds to share stories of his successes as an athlete. 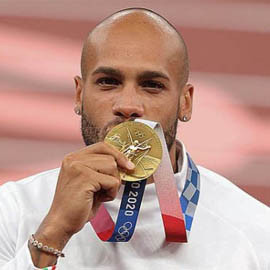 Lamont Marcell Jacobs is a professional athlete, widely known for competing in disciplines of 60 and 100 metres. Having claimed countless titles for his talents, Lamont has since been selected to represent Italy at the 2020 Tokyo Olympic Games and set European records with his skills. A truly inspirational athlete who soars to the finish line time and time again, Lamont Marcell Jacobs is a fantastic addition to events of all kinds to share stories of his successes as an athlete.

As a child, Lamont played football and basketball, but soon proved his talent for sprinting. Suggested by his teachers to begin competing in athletics, Lamont discovered his love for sprinting and the long jump- competing in his first major competition at the Mediterranean U23 Championships, finishing in 1st place. From that point on Lamont has claimed countless other victories, including Silver at the 2019 European Team Championships, Gold at the 2021 European Indoor Championships, Silver at the 2021 World Relays and winning titles at 2018, 2019, 2020 and 2021 Italian Athletics Championships.

After proving his worth as a successful athlete, Lamont qualified to represent Italy at the 2020 Tokyo Olympic Games. Postponed by a year due to Covid-19, Lamont competed at the games in 2021 and claimed Olympic Gold in the men’s 100-metre race. During competing at the 2020 Tokyo Olympics, Lamont set a new European Record with a time of 9.80 seconds, making headlines as the fastest time ever run by someone outside of America and Jamaica. He also made headlines as the first Italian athlete to claim the 100m Olympic title, proving his dominance as an athlete with many more performances due to come.

Having also set records of 6.47 in the 60m race and 38.11 in the 4x100m relay, Lamont is a formidable athlete and a force to be reckoned with on the track. Having claimed countless victories, Lamont is a highly promising athlete and an inspiration to many. With such a status, he is now a popular choice to have appear as a speaker at a range of events. Whether he be inspiring budding athletes with how he trained to achieve such victories or sharing stories of his wins as an after-dinner sports speaker, Lamont Marcell Jacobs will captivate audiences at each event he attends.