British middle-distance runner, Laura Muir specialises in the 800m, 1500m, 3000m and 5000m. A talented and promising athlete, Laura has earned her time in the limelight with impeccable performances that prove her determination and passion for the sport.

Laura Muir
British middle-distance runner, Laura Muir specialises in the 800m, 1500m, 3000m and 5000m. A talented and promising athlete, Laura has earned her time in the limelight with impeccable performances that prove her determi 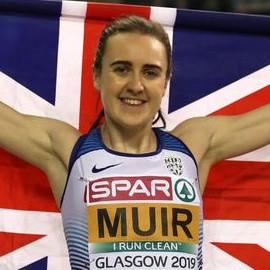 British middle-distance runner, Laura Muir specialises in the 800m, 1500m, 3000m and 5000m. A talented and promising athlete, Laura has earned her time in the limelight with impeccable performances that prove her determination and passion for the sport.

Laura made her debut internationally during the 2011 European Cross Country Championships. At the championships she joined the Great British junior women’s team, returning victorious with the gold medal. Her next great achievement came in 2013, representing Great Britain in the 800m race and claiming a new personal best. Later in 2014, she attended the 2014 Diamond League event, a significant victory for Laura after she beat the 27 year old Scottish 1500m record. Two years later, Laura returned to the 2016 Diamond League, this time breaking Kelly Holmes’ British 1500m record.

At the Paris Diamond League, Laura made another significant achievement, setting the new national 1500m record with a time of 3:55:22. This time also gave her the title of the fastest woman in the world for 1500m. Next Laura attended the Birmingham Indoor Grand Prix, breaking the 1000m British record. She also set a new record in the 5000m race, impressive after only running that distance once previously. At the 2017 European Athletics Indoor Championships Laura claimed herself another gold medal for her collection after beating the 32 year old record that was previously held at the event. A day after she claimed the new record for the 3000m, ending the competition with two championship record titles.

With such a diverse history in the sport, Laura is the perfect candidate for an Olympic speaker at your next event. Able to truly enlighten people on what it takes to be an elite athlete, Laura is guaranteed to win over even the toughest of audience members.