The poster girl of the London 2012 Games, Olympic heptathlon champion Jessica Ennis-Hill is one of the most popular and well-liked athletes in British sporting history. As an Olympic speaker, Jessica draws not only on her courageous exploits as an elite athlete, but also on her experience of overcoming a career-threatening injury and motherhood before returning to international competition in time to compete at the Rio 2016 Olympics.

Jessica Ennis-Hill
The poster girl of the London 2012 Games, Olympic heptathlon champion Jessica Ennis-Hill is one of the most popular and well-liked athletes in British sporting history. As an Olympic speaker, Jessica draws not only on he 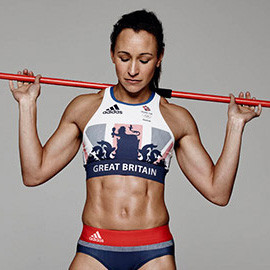 The poster girl of the London 2012 Games, Olympic heptathlon champion Jessica Ennis-Hill is one of the most popular and well-liked athletes in British sporting history. As an Olympic speaker, Jessica draws not only on her courageous exploits as an elite athlete, but also on her experience of overcoming a career-threatening injury and motherhood before returning to international competition in time to compete at the Rio 2016 Olympics.

The former three-time World Champion is a role model in athletics and is known throughout the country for her positive and friendly personality. She takes great satisfaction in helping to promote athletics and healthy living to young girls. With numerous Olympic stories to share, Jessica is an experienced Olympic speaker who talks on issues including mental strength, overcoming adversity, peak performance and motivation.

Her gold medal success at the London 2012 Olympic games was her breakthrough in terms of cementing her public profile. However, she came into those games with a huge pedigree having already been crowned World and European Champion with her first senior success coming as far back as the 2006 Commonwealth Games in Melbourne, where she won a bronze medal. Following her 2012 Olympic success, Jessica announced her plans to have a child and much to everyone’s surprise, she returned – within a year – after giving birth to win the 2012 Beijing World Championship Heptathlon gold medal and completed one of the most remarkable comebacks in modern sporting history. However, she had to settle for silver at the Rio 2016 Olympic games, losing by just 35 points to the emerging and dominant athlete from Belgium, Nafissatou Thiam, who set a remarkable five personal bests in the seven events.

Announcing her retirement from athletics in October 2016, Ennis-Hill left a major legacy not only of championship victories but also other awards which reflected her popularity and impact as an individual as much as an athlete. In 2016 she was voted as Great Britain’s favourite sporting hero in a poll conducted by Sport Relief and Sportswoman of the Year at the British Ethnic Diversity Sports Awards. She was also appointed DBE in the 2017 New Year Honours for her services to athletics and later that year she won the BBC Sports Personality of the Year Lifetime Achievement Award, only the second woman to receive the award.

Jessica has journalistic experience as a columnist for The Times newspaper. She also released a one-off BBC programme in 2017 called Jessica Ennis-Hill and the Next Generation in which she interviewed the best of up and coming British athletes in the lead up to the World Athletics Championships. Not content with her presenting and journalist work, Jessica launched a fitness app called Jennis which offers exercise routines and programmes specially created for pregnant women. She also supports charities including Comic Relief and in her native Sheffield, The Children’s Hospital Charity and The Western Park Hospital Cancer Charity.

One of the greatest and most well-loved British athletes of all time, Jessica Ennis-Hill’s passion and success in athletics is matched only by her tireless approach to her work as an inspirational Olympic speaker. With a pedigree almost unmatched in modern times, she is an ideal speaker to give your event the golden sparkle it deserves.