Popular Paralympic speaker, Oliver Hynd MBE is a British Paralympic swimmer who has had an incredible career, which he says was the perfect choice for him due to having the condition Neuro Muscular Myopathy. Widely regarded as one of the greatest ever Paralympic swimmers, Hynd has won an abundance of gold medals.

Ollie Hynd
Popular Paralympic speaker, Oliver Hynd MBE is a British Paralympic swimmer who has had an incredible career, which he says was the perfect choice for him due to having the condition Neuro Muscular Myopathy. Widely regar 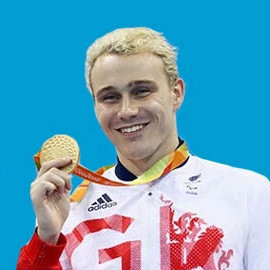 Ollie’s first taste of competitive swimming is when he used to follow his brother who won a swimming gold and set a new 400m freestyle world record at the 2008 Paralympic Games in Beijing. From this inspiration, Ollie has gone on to become one of Britain’s best Paralympic swimmers of all time. When he represented Britain for the first time in 2011 – at the IPC European Championships – he won a gold medal and set a British and European Record in the 200m individual medley.

He also got a silver in the 400m freestyle and a bronze in the 100m backstroke. Having dealt with setbacks from an early age, Hynd is an expert in overcoming adversity. He often speaks about the importance of dealing with pressure, especially when large parts of your career are spent under the spotlight.

Among the other main achievements the Paralympic speaker has managed to date are breaking his brother’s world record at the 2015 IPC World Championships, where he won gold medals for the 200m individual medley and 400m freestyle as well as a bronze for the 100m backstroke.

A truly incredible swimming career filled with success and glory throughout, Hynd now spends lots of his time as a speaker where he aims to inspire audiences across the world. As a speaker, he often discusses vital topics such as peak performance and maximising success.