Rhona Martin knows what it’s like to be at the very top of her game, then drop out of the public eye then hit the top again. In 2002, the popular Olympic speaker was part of a team that won a gold medal in curling at the Winter Olympic Games.

Rhona Martin
Rhona Martin knows what it’s like to be at the very top of her game, then drop out of the public eye then hit the top again. In 2002, the popular Olympic speaker was part of a team that won a gold medal in curling at the 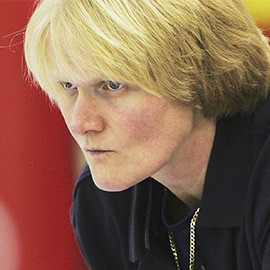 Patronised by some elements of the media as ‘housewives with brooms’, Rhona, Fiona MacDonald, Janice Rankin and Debbie Knox brought home the first Winter Olympics gold that Britain had won for 18 years and that Scotland had won for 66 years. A monumental achievement, Rhona often discusses the hard work and dedication required to succeed at the highest level.

The team were famous and were even welcomed at Heathrow Airport by crowds of people waving flags and cheering them on. Rhona and her partners were also awarded MBEs, praised by the then Prime Minister Tony Blair, and appeared on various TV shows. Winning the gold medal ensured Rhona was regularly put under the spotlight, she often discusses how to deal with pressure when the eyes of a nation are upon you.

However, after the hubbub had dissipated, the team were no longer ubiquitous and Rhona went through marital problems, becoming at one point a single mother living on benefits. Despite this, she picked her life up again and went on to coach Scotland’s junior curling team while forging a career as an in-demand Olympic speaker. Rhona is the perfect example of drive and determination, when she was at her lowest point she fought and never gave up and got her career back on the right tracks. A truly inspiring woman, Rhona uses her experiences to provide truly compelling speeches.

Rhona, who also skipped for Scotland at both the World and European Championships and participated in the 2006 Winter Olympic Games, has commentated on other curling events for television. A versatile woman who has showcased drive and determination in abundance, Rhona Martin MBE can provide fantastic speeches to audiences of any size.