A specialist in the Winter Olympic Games sport of skeleton bobsleigh, in which she rides head-first and lying face down on a flat sledge, Olympic speaker Shelley Rudman is probably most famous for winning a silver medal at the 2006 Winter Olympic Games.

Shelley Rudman
A specialist in the Winter Olympic Games sport of skeleton bobsleigh, in which she rides head-first and lying face down on a flat sledge, Olympic speaker Shelley Rudman is probably most famous for winning a silver medal 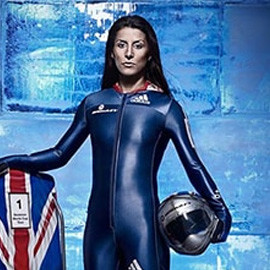 However, Shelley was the British number one for nine years between 2004 and 2012 and is to this day the country’s most successful female skeleton athlete. She often discusses maximising success and being under the spotlight, two topics Shelley had to endure throughout her successful career.

Apart from her amazing Olympic performance, what stood out on this occasion was that Shelley was the only medal winner for Great Britain at the 2006 games. A three-time Olympian (she also appeared in 2010 and 2014), she first came on to the scene in 2002-2003 and by 2005 she was the World Student Games champion.

By 2009, the Olympic speaker became European champion (repeating the feat in 2011) and in 2012, Shelley was the World Cup overall champion, winning a World Championship gold a year later. A hugely successful career, Shelley now bides her time by providing inspirational after dinner speeches for a variety of audiences. She uses her experiences and knowledge to help captivate her audience and better their personal performance.

The only time that she has not been active competitively in recent years was when she took a year out during the 2007-08 Skeleton World Cup season to have a baby girl.

The very next season and Shelley was winning the 2008-09 Skeleton World Cup event, followed by a silver in the same season at the World Cup in Germany and then the aforementioned win at the 2009 European Bob Skeleton Championships.