Eight-time Olympic champion, Usain Bolt is described as the most naturally gifted athlete the world has ever seen. The Olympic speaker certainly caught the attention of the world when he won three gold medals and broke three world records at the 2008 Olympic Games in Beijing.

Usain Bolt
Eight-time Olympic champion, Usain Bolt is described as the most naturally gifted athlete the world has ever seen. The Olympic speaker certainly caught the attention of the world when he won three gold medals and broke t 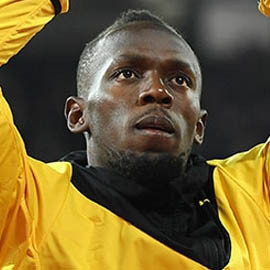 He went down in history as the only man ever to break the records for the 100m, 200m and 4 x 100m events at the same Olympic Games. He then broke his own 100m and 200m records the following year at the IAAF World T&F Championships in Berlin.

As if that wasn’t enough, Bolt came back four years later at the 2012 London Olympic Games and won his titles all over again – breaking the world record for the 4 x 100m yet again. After winning the 100m and 200m gold in the 2016 Rio Olympic Games, Bolt became the first athlete to win these events three times. As a speaker, Bolt often reflects on his athletics success and discusses the importance of peak performance and performing under pressure.

Usain’s achievements on the track are not just confined to that short timeframe, of course, and he has wowed crowds around the world for many years, winning World Championship gold medals in 2009, 2011, 2013 and 2015 and a Commonwealth Games gold 2014.

The Olympic speaker’s total medals haul is 23 golds and five silvers. At the Olympic Games, Bolt has won eight gold medals which makes him one of the most decorated athletes of all time. He has also won the title of IAAF Male Athlete of the Year no fewer than five times. Moving outside the sport, Bolt has opened his own restaurant, set up the Usain Bolt Foundation and created his own branded clothing alongside Puma.

Recently, Bolt has moved on from Athletics to focus on football. He played in friendly matches for Australian club Central Coast Mariners in which he scored two goals. After eight weeks with the club, Bolt decided he no longer wanted to pursue a career in football due to his sporting life being over. As an Olympic speaker, Bolt can use his experiences within athletics to inspire audiences of any size.

Seen as a leading inspiration in the world, Bolt is one of the most highly sought after speakers on the circuit.