Will Bayley is best known for being a professional table tennis player, with a number of Paralympic triumphs to his name. A hard-working and committed sportsman, Will has continually faced adversity throughout his life and overcome that adversity with great courage and determination.

Will Bayley
Will Bayley is best known for being a professional table tennis player, with a number of Paralympic triumphs to his name. A hard-working and committed sportsman, Will has continually faced adversity throughout his life a 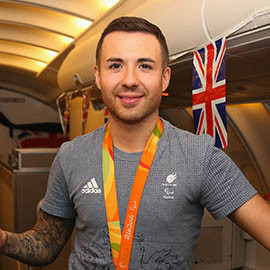 Will was born with the condition arthrogryposis, congenital joint contracture that affects all four of his limbs. From the age of three months, Will was continually in and out of hospitals, undergoing a number of operations at Great Ormond Street Hospital. Adversity seemed to haunt Will, and unfortunately at the age of seven, he was diagnosed with Non-Hodgkin’s Lymphoma. However, Will never let his misfortune hinder him in any way, making a full recovery from cancer back at Great Ormond Street. Whilst he was recovering, Will’s grandmother brought him a table tennis table and from there his love for the sport blossomed.

Will joined the Byng Table Tennis Club where he had the opportunity to represent the Kent men’s non-disabled team. Later moving to Bristol, Will joined the Bristol Table Tennis Academy where he trained and improved his skills. After time perfecting his skills Will joined the Great Britain Para table tennis team. At the 2008 Beijing Paralympic Games, Will made his Paralympic debut. Unfortunately, Will was beaten and so he decided to stay in China to train with the best in the sport.

Three years after his Paralympic debut Will had the opportunity to play in the 2011 European Championships. This competition saw Will claim his first gold medal and he was also voted Players Player of the Year. London 2012 Paralympic Games arrived and Will was on top form ready to claim the win. He placed second during the Individual- Class 7 match, claiming a silver medal for his collection. This narrow miss on first place made Will more determined than ever, training strictly and claiming the world number one ranking in 2013.

In 2014 Will had the chance to play at the World Championships in China. Will was triumphant in this competition, claiming the title of World Champion. Such impeccable performances were rewarded with the esteemed Disability Sport Award at the inaugural Daily Mail and Sport England Pride of Sport Awards. Later in 2016 Will made his greatest achievement to date, claiming a Paralympic gold medal for table tennis.  Another significant achievement for Will came in 2017 when he was appointed Member of the Order of the British Empire for his services to table tennis.

Outside of his Paralympic commitments, Will also lent his talent to the BBC programme Strictly Come Dancing. On the programme, he dedicated a dance to 7 Years to the staff who treated him at Great Ormond Street throughout his youth. Will is always eager to raise awareness for his condition and the hardships that he has faced in his life. As an Olympic speaker, he is able to cover topics such as overcoming adversity, disability, drive, determination, peak performance and passion. Will is guaranteed to leave a lasting impression on any audience member, with an inspiring and heartwarming passion evident in everything that he does.

Videos of Will Bayley

"Will’s talk was the standout moment of our annual conference. Funny, Inspiring and moving, he not only presented superbly, but spent as long as it took to pose with every single attendee with his medals and MBE. I’d highly recommend him to anyone looking for a conference speaker"

"We had a fabulous day, thank you! Will was lovely, I’ve had lots of great comments about him from the delegates too"