Between the 1990s and the 2000s, there was no stopping Frankie Fredericks, the former track and field athlete from Namibia who specialised in the 100m and 200m. As an Olympic speaker, he draws upon his experience as an athlete to inspire an improved perspective in his audience. Popular and passionate, Frankie is an invaluable expert on sport, high-performance teams and peak performance.

Frankie Fredericks
Between the 1990s and the 2000s, there was no stopping Frankie Fredericks, the former track and field athlete from Namibia who specialised in the 100m and 200m. As an Olympic speaker, he draws upon his experience as an a 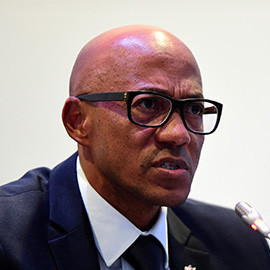 In all, this incredibly motivational speaker has 28 medals and it is this fiery determination that comes across so strongly when he delivers his presentation to audiences at a wide range of events.

A member of the International Olympic Committee, Frankie Fredericks was the world record holder in the indoor 200m, having achieved 19.92 seconds in 1996. Though athletes usually retire at a younger age compared to other professions, Frankie was able to run the 200m in under 20 seconds aged 35. After retiring from competitive sport, Frankie was appointed a member of the International Olympic Committee in 2004 and head of the Athletics Namibia in 2009.

Following this, in 2012, he was nominated as a member of the International Olympic Committee. Finally, Frankie is one of 54 elite athletes pledged to Champions for Peace, with Peace and Sport. In his speeches, Frankie continues his rhetoric of personal development through sport, inspiring interest in his audience.