As a competitor for Scotland, curler and Olympic speaker Greg Drummond was part of the silver medalist team at the 2014 Sochi Winter Olympic Games in Russia. As an Olympic speaker, Greg shares his experience of elite sport, competing at some of the most prestigious winter championships in the world.

Greg Drummond
As a competitor for Scotland, curler and Olympic speaker Greg Drummond was part of the silver medalist team at the 2014 Sochi Winter Olympic Games in Russia. As an Olympic speaker, Greg shares his experience of elite spo 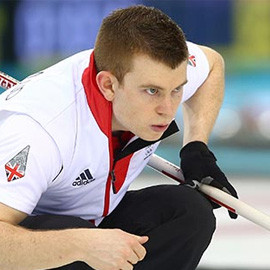 Passionate and insightful, his expert discussion of peak performance and overcoming challenges are invaluable for corporate audiences. Greg Drummond has won silver medals at the World Curling Championships at Regina, Canada, in 2011 and at Basel, Switzerland, the following year.

As an Olympic speaker, Greg is able to share his experiences from when he was just 18 years old and taking part in the World Junior Curling Championships of 2007, coming in sixth place. Two years later and Greg appeared in the European Junior Curling Challenge, then finishing in fourth place in the Winter University Gamesin Erzurum, Turkey.

Other claims to fame of this highly-talented Olympic speaker include winning the Scottish Men’s Curling Championship in 2011 and 2012. In 2013, Greg proved his sporting talent when he won the German Masters title with David Murdoch. Within the world of curling, athletes need to maintain a calculated focus. Due to this, Greg specialises in productivity and focus in his motivational speeches.